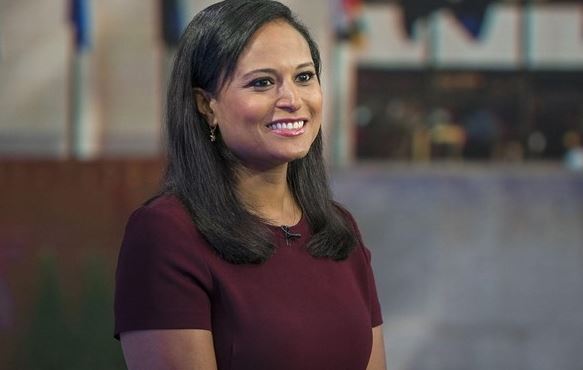 Kristen Welker is a White House correspondent television journalist for NBC News, reporting for the programs NBC Nightly News with Lester Holt, TODAY, Meet the Press and NBCNews.com. She moderated what was meant to be the third presidential debate but became the second, on October 22, 2020. She is from Philadelphia in the United States of America. Ms. Welker is also a co-anchor alongside American journalist Peter Alexander, on the news and talk program, Weekend Today, the Saturday edition of Today. Ms. Welker is a member of the National Association of Black Journalists.

How old is Kristen Welker? – Age

Who is Kristen Welker Married to? – Husband | Spouse

Ms. Welker is married to John Hughes, a American marketing director. The two tied the knot on 4th March 2017, in Philadelphia. They had met about three years prior to their wedding, in 2014, a meeting that was as a result of their friends setting them up. They now live in Washington, D.C.

During the 2021 National Infertility Awareness Week, Kristen and her husband John Hughes announced that they are expecting a baby girl through a surrogate. She spoke about her other ‘great’ passion aside from journalism as her being able to start a family with her husband. She went ahead to elaborate that after a few months into their marriage, they realised that trying to get a baby was not working and resulted to IVF which according to her went well the first time. However, she was informed that the lining of her uterus was too thin to carry a child.

The journey was tough and the couple decided to explore the options of surrogacy or adoption. They chose to start with surrogacy and unfortunately the first trial did not work. Their determination of being parents made them to keep trying and trying and on June 12, 2021, their daughter was born. Their baby girl’s name is Margot Lane.

Since graduating from Harvard, Ms. Welker has worked at such television stations like WLNE-TV in Providence, Rhode Island, and KRCR-TV in Redding/Chico, California, all with ABC. In 2005, she joined NBC at its affiliate WCAU in Philadelphia as a reporter and weekend anchor.

Welker then began her journalism career as a network correspondent in Burbank, California. In 2010, she began working for NBC News as a correspondent while in December 2011, she became an NBC White House correspondent. As such, she got to travel internationally and domestically with the then President Barack Obama, First Lady Michelle and Vice-President Joe Biden. Some of the breaking stories Welker had a lead on included FLOTUS’s first international solo trip, to South Africa,” and payroll tax cuts. She got a nomination for an Emmy Award during her first year working at the network for her mid-term election coverage on NBC News.

She also works for MSNBC at the White House press briefings regularly and fills in on NBC Nightly News and Today, occasionally. In November 2019, Welker was a moderator at the 5th Democratic presidential debate hosted by MSNBC and The Washington Post at Tyler Perry Studios in Atlanta while in January 11, 2020, she joined Weekend TODAY as a co-anchor alongside NBC’s Peter Alexander.

During the early 2000s, Kristen worked at WCAU-TV, an NBC owned and operated Philadelphia station as an anchor for the NBC 10 weekend newscasts. Prior to anchoring, she had began as a general assignment reporter in April 2005. Other stations that Welker worked for was WLNE-TV in Providence, Rhode Island and KRCR-TV in Redding, California.

Under Trump’s administration, Kristen was a White House correspondent. She attended the press briefings by the former president and his press secretary, during which she raised dynamic questions which were also often highlighted by other news outlets.

On October 22, 2020, Kristen moderated the 2nd U.S. presidential debate between the then President Donald J. Trump and former Vice President Joe Biden. She became the second black woman to ever moderate a presidential debate by herself, with the first being ABC News journalist Carole Simpson in 1992 when she moderated the debate between Bill Clinton and George HW Bush.

Unlike her 2020 debate moderating predecessors, Kristen was praised for how she handled the debate. She was able to control the conversation by keeping the candidates in check. On social media, she has been labeled the “clear winner” of the debate. Even Trump took a minute to voice his praise for Welker’s performance, “By the way, so far I respect very much the way you’re handling this,” he said. This was after he had called her “terrible and unfair” ahead of the debate.

You can find Ms. Welker on Twitter as @kwelkernbc

How much does Kristen Welker make? – Net Worth