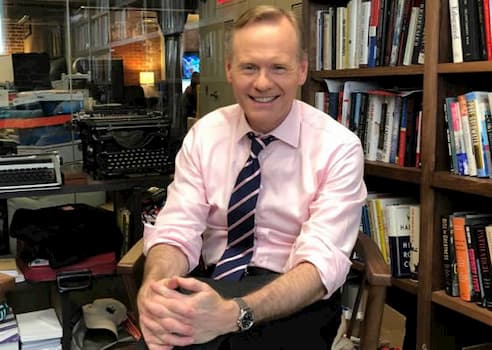 John Dickerson is a journalist and television host working as a reporter for CBS News, as a correspondent for the show 60 Minutes and a contributing anchor to CBS News’ political coverage. Prior to joining 60 Minutes, Dickerson was a co-host of CBS This Morning with Gayle King and Norah O’Donnell. O’Donnell took over from Dickerson as interim anchor of the CBS Evening News in the summer of 2019. Prior to that too, Dickerson hosted the show Face the Nation, was the political director of CBS News, chief Washington correspondent for CBS News, and a political columnist for Slate magazine.

John is a son of the late Nancy Dickerson Whitehead, an American journalist and pioneering television newswoman, and Claude Wyatt Dickerson. He grew up in a household of seven with four siblings; one brother and three sisters. The family lived in McLean, Virginia. He attended Sidwell Friends School and the University of Virginia for a degree in English. He graduated from the university with distinction.

Yes, the former “Face the Nation” host is married. His wife is known as Anne Dickerson (born as Anne Benton McKeehan). Mrs. Dickerson is the founder of an organization known as “15 Minutes Group”. Her organization’s core business is assisting CEO’s, authors, journalists, non-profits companies and other experts communicate more effectively while doing their work. John and his wife are graduates of the University of Virginia and they tied the knot on 3rd September 1995. They live in Washington, D.C.

Dickerson is a father of two: son, Brice Dickerson, and daughter, Nancy Dickerson.

John began his career in journalism with Time magazine in 1995 where he covered politics and economics. He worked with the firm for 12 years with the last four as a White House correspondent. Prior to 2007, Dickerson was a part of The Al Franken Show on Air America Radio, each Wednesday. In 2009, Dickerson hosted the show Face the Nation, three times and in November 2011, he became the new Political Director of CBS News.

Dickerson is a contributor to Washington Week on PBS and for the Slate Political Gabfest with David Plotz and Emily Bazelon. On 7th June 2015, Dickerson became the host of the “Face the Nation” show. This role carried on for two and half years until he left the show on January 21, 2018. Shortly after, he joined CBS This Morning as a co-anchor.

In May 2019, the CBS Evening News program lost its host, Jeff Glor, as he stepped down. Susan Zirinsky, CBS News President announced on May 10 that Dickerson would fill in as the anchor of the show for a week starting May 13, 2019. The network rotated a series of anchors in broadcasting the program until Norah O’Donnell took over the anchoring on July 15, 2019.

♦  2006 – On Her Trail
– This is Dickerson’s book in which he describes his relationship with his mother. It was published by Simon & Schuster.
♦  2016 – Whistlestop: My Favorite Stories from Presidential Campaign History