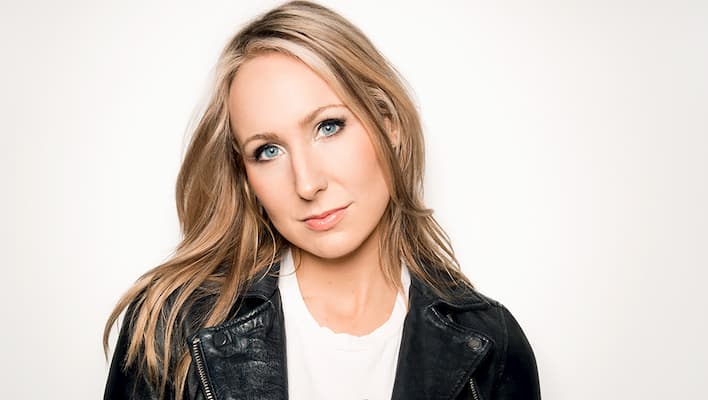 Nikki Glaser is a stand-up comedian, radio host, podcast host, actress and television host from the United States of America. Ms. Glaser was the host of the sex comedy talk show series, Not Safe with Nikki Glaser, which premiered on February 9, 2016 on Much and Comedy Central. The show was however cancelled after one season. Among her stand-up comedy specials include: Nikki Glaser: Bangin’ (2019).

From Cincinnati, Ohio, Nikki is the daughter of Edward J. Glaser and Julie E. Glaser. Her family has Irish and German ancestry. She has a sister by the name Lauren Glaser. Growing up, she was sent to school at Kirkwood High School, after which she joined the University of Kansas. At university, she studied for her degree in English Literature.

Nikki is not married. She also does not talk about her romantic life. However, she has been in a relationship, the only known one being with producer Chris Convy. It is not clear whether the two are still together or not as they have not commented on the issue. They have worked together on her show “Not Safe with Nikki Glaser” with Glaser as the creator and Convy as an executive producer and co-creator. They were last seen together publicly during the premier of Nikki’s Comedy Central television show.

Glaser got into comedy when she was 18 years old. She wrote her jokes while she was in university. In an interview with Revue magazine she said that she did not know how to write jokes, hence, she tried writing basing her ideas of her favorite stand-ups. She began performing and has since appeared in comedy shows like Conan, Last Comic Standing, The Late Late Show with James Corden, and The Tonight Show with Jay Leno. On October 1, 2019, she performed her first stand-up special “Bangin'” on Netflix.

Aside from being a comedienne, Nikki is also a podcast, radio and television host. She hosted the podcast “You Had To Be There” with Sara Schaefer from 2011 to 2014. She also co-hosted the relationship-based podcast “We Know Nothing” alongside roommate/musician Anya Marina and comedian Phil Hanley. Nikki and her co-hosts took calls from listeners on their relationships and they made attempts to advice them.

Nikki’s next podcast was “Not Safe” with Dan St. Germain and Brian Frange. This was a companion podcast to her Comedy Central show from January to October 2016. Nikki’s first radio show was on Sirius XM from February 2018. It was titled “You Up? With Nikki Glaser”. She has also appeared on several other radio shows such as The Joe Rogan Experience, the Wrap-up show as well as on Howard Stern’s show as a guest.

From 29 January, 2013 to 29 October, 2013, Glaser co-hosted the series Nikki & Sara Live with Sara Schaefer, on MTV. She the co-created and hosted a talk show on sex on Comedy Central, titled Not Safe with Nikki Glaser, from 2nd June 2015. It was however, cancelled in November 2016. She has also been a part of several roasting shows as well as acted in several television shows. The American dating game show, Blind Date, was revived and Nikki became its new host. It airs on Bravo television network.

What is Nikki Glaser’s Net Worth?

Nikki has an estimated net worth of about $2 million.