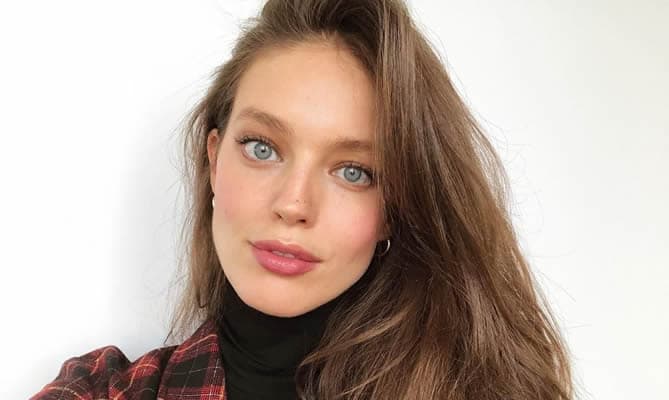 Emily DiDonato is a fashion model from the United States of America. She is associated with such companies as Maybelline New York, Guess? and Ralph Lauren.

How old is Emily DiDonato? – Age

Emily is of Native American, Italian and Irish ancestry. Her family got to the United States from Italy when her great-grandparents moved from their ancestral home. They settled in America and she was born in Goshen. Her parents are Richard J. DiDonato and Frances DiDonato.

The Maybelline New York model is married to Kyle Peterson. Peterson is an American financier. The couple got married in July of 2018. The two met while on a flight to Colorado, seated next to each other.

Emily and Kyle wed at the Ritz-Carlton in Bachelor Gulch, Colorado on July 23, 2018. Their wedding were kept under wraps until it took place. They had an exclusive photo shoot with Vogue and shared what their wedding was like. They also shared details of the day such as they wrote their own vows and that it was officiated by Peterson’s father.

Emily DiDonato as a Model

When Ms. DiDonato was 10 years old, she met Tina Kiniry from the John Casablancas Modeling & Acting Agency of Connecticut at The Danbury Mall. Kiniry was scouting for models and she was intrigued by Emily. In 2008, Kiniry introduced DiDonato to Request Model Management. She was soon booked for a job appearing as the face of Guess? for its 2009 clothing for spring show. In the same year, she modeled in Ralph Lauren’s “Rugby” spring advertisement campaign.

After her jobs with Guess? and Ralph Lauren, DiDonato was signed by Maybelline New York in May 2009. Her debut for the company was on a commercial “Color Sensational Lip Color” line, appearing alongside other models like Julia Stegner, Christy Turlington and Jessica White. In August, she began walking for Victoria’s Secret, with her first magazine cover being The Block’s October 2009 issue.

DiDonato became the face of Acqua Di Gioia fragrance by Giorgio Armani, in 2010. From the campaign, her images were used as the cover pages of L’Oréal’s Annual and Financial Reports for the same year. She then appeared on an advertising campaign for Oysho in the summer 2013.

DiDonato is also a Sports Illustrated Swimsuit model with her debut for the issue in 2013. The shoot took place in Namibia. Since then, she has modeled for Chanel, Louis Vutton, Balmain, Givenchy, Loewe, rag+bone, and Giles Deacon. Advertising campaigns with DiDonato include for companies such as Aldo, Oscar de la Renta, Just Cavalli, Miu Miu, Giorgio Armani, Calvin Klein, Gap, Guess, Trussardi, Ralph Lauren, Elie Tahari, and Missoni.

The Swimsuit model is 1.78 m tall with brown hair and blue eyes.

How much is Emily DiDonato worth? – Net Worth

DiDonato is reportedly worth about $2 million.