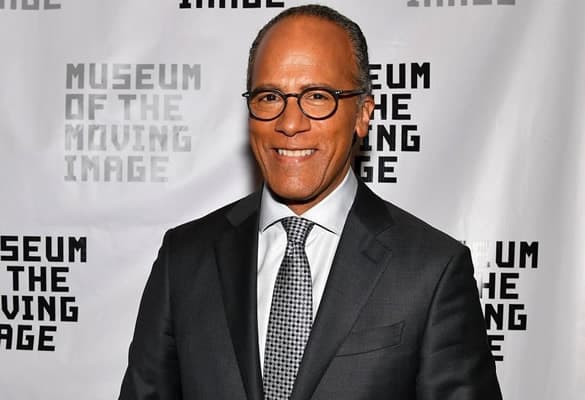 Lester Holt is a news anchor/journalist from the United States of America. He is known for anchoring NBC’s Nightly News, permanent anchor as of 18th June 2015, as well as the reality legal show, Dateline NBC. In 2016, Holt added to his fame when he moderated the year’s first presidential debate, mainly receiving praise for his efforts in fact-checking any false statements by the presidential candidates on stage.

Born in San Francisco as Lester Don Holt Jr., Lester is the youngest of four children born of Lester Don Holt, Snr. and June DeRozario (Holt). He has Jamaican roots, with his maternal grandfather being born of an Indo-Jamaican and White Jamican mother and his paternal grandparents being from Jamaica.

Holt attended Cordova High School for his studies and graduated in the class of 1977 and then joined California State University, Sacramento. At the university, he majored in government but he never graduated. He got a job as a DJ at a Country and Western station. For a full-time position at the station, Lester had to report news and he took up the opportunity. He did this while still in college.

Holt is married to Carol Hagen. The couple lives in Manhattan and have two children.

Holt is a father of two, sons; Stefan Holt and Cameron Holt. Stefan has followed in his father’s footsteps of being a journalist. He was a news anchor at WMAQ-TV in Chicago, a station that is owned by NBC. In 2016, he joined WNBC and joined his father on the same floor. He managed to become an anchor of NBC’s 11 p.m. news broadcast after succeeding Chuck Scarborough.

Lester Holt as a Journalist and News Anchor

Mr. Holt began his career in journalism at the Country and Western station he worked for while he was in college at California State University. He then joined CBS as an international correspondent, news reporter as well as an anchor, and spent 19 years with the network. He got hired to report for WCBS-TV in New York City in 1981 while in 1982, he moved to KNXT in Los Angeles as a weekend anchor and reporter.

Holt joined WBBM-TV in Chicago, in 1986, as an anchor for the evening news. He spent a total of 14 years with the station. He worked at the anchor desk and also covered reporting from troubled spots around the world. In 2000, he joined MSNBC and in 2003, he assumed full-time duties at NBC News as a substitute anchor for NBC Nightly News and Today. After the death of David Bloom, his fellow co-anchor, Holt became the show’s full-time anchor.

He also anchored a daily newscast on MSNBC, for two hours each time, until late 2005. He was named as the anchor of NBC Nightly News, a weekend edition show, as of May 9, 2007. For eight years, he anchored the program after which he replaced fellow NBC journalist Brian Williams to be the show’s permanent anchor. After being made the permanent anchor of the show on June 18, 2015, Holt became the first African-American to be a solo anchor of a weekday network nightly newscast. Alongside Nightly News, Holt is the host of Dateline, also a program on NBC.

He has also hosted other programs such as the 9/11 conspiracy theories for The History Channel, was a sportsdesk reporter for 2008 Summer Olympics for NBC Sports coverage and Dateline on ID, an edition of Dateline NBC for Investigation Discovery network. In January 2016, he moderated the Democratic presidential candidates’ debate and also the first presidential debate, between Presidential candidates Donald Trump and Hillary Clinton. Trump complained that it was “a very unfair system” because “Lester is a Democrat” though he was registered as a Republican at the time. Trump however, commended Holt for a “good job”, after the debate. In 2017, Lester interviewed President Trump, asking him about the firing of James Comey, a former FBI director.

Lester Holt Salary and Net Worth

It is a common trial for publications to estimate the net worth as well as salaries of well-known people. For personalities whose wealth is declared the information is not far from the truth, however, for others such as Holt, their net worth and salary is not openly known to the public. However, from the many years he has been on-air, we can also estimate his net worth to be in millions of U.S. dollars.