Marcus Scribner Biography, Age, Mother, Father, Black-ish, Net Worth and on the Environment 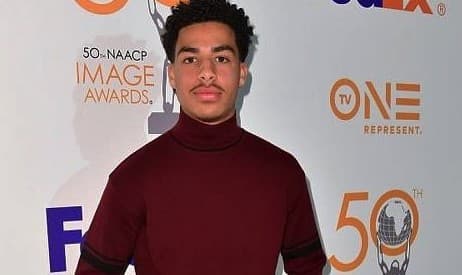 Marcus Scribner is an actor from the United States of America who is best known for his portrayal of the character Andre Johnson Jr. on the ABC comedy show Black-ish. Scribner began appearing on the show in his early teenage years. Marcus is also the voice behind the character Bow in the animated series She-Ra and the Princesses of Power on Netflix.

Scriber’s real-life family is not really in the limelight, hence, little is known about them. However, the actor has talked of his acting experience on “Black-ish” as one that goes down in his own household. Scribner Sr. (Marcus’ father) is black while his mother is half black and half white, making Marcus multiracial.

Members of Scribner’s family have names from Roman and Greek mythology. They include his sister Athena, father Troy and himself. Since early 2015, Marcus does home-schooling to enable him work while studying.

The “She-Ra and the Princesses of Power” actor began acting at a very young age. He was 10 years old when he booked his first role on the television series “Castle”. He built up his career from then and has since appeared in other productions such as Nickelodeon’s Wendell & Vinnie, New Girl on Fox, and Wedding Band on TBS.

In 2014, Marcus landed a starring role on then new ABC sitcom, “Black-ish” as Andre Johnson Jr., the teenage son and second child of Andre Johnson Sr. (played by Anthony Anderson) and Rainbow Johnson (played by Tracee Ellis Ross). Other actors and actresses on the show are Jenifer Lewis (grandmother), Laurence Fishbourne (grandfather), Yara Shahidi (elder sister), Miles Brown (younger brother) and Marsai Martin (younger sister). Marcus was 14 years old when the series began and 13 years old when he auditioned for the role and actually beat Anthony Anderson’s real-life son to get the character.

After the first season aired, he received an NAACP Image Award nomination for Outstanding Supporting Actor in a Comedy for his portrayal of Junior. He has since maintained his role on the series as he transitions from a teenager into a young adult.

Scribner has also had other acting roles which include voicing Buck in The Good Dinosaur (2015) by Pixar. He also began voicing the recurring role of Smudge on the animated series “Home: Adventures with Tip & Oh”. In 2018, it was announced that Marcus would have a lead role in the thriller “Confessional.” He has also appeared on the first spin-off of “Black-ish” known as “Grown-ish” alongside his on-screen elder sister Yara Shahidi and the second spin-off “Mixed-ish”, both as Andre Johnson Jr.

In 2018, he voiced the character Bow, the best friend of She-Ra and Glimmer, on the animated series She-Ra and the Princesses of Power on Netflix.

Marcus Scribner on Conservation of the Environment

In 2017, Marcus wrote a piece for Mic, asking for more action on environmental protection and help defend the Environmental Protection Agency. He wrote passionately on the environmental issues affecting while acknowledging that something had been done to better the society though more work needed to be undertaken.

What is Marcus Scribner’s Net Worth?

Scribner’s actual net worth has not yet been revealed though he is estimated to be worth over $1 Million. Having had so many roles and still going strong as an actor, his net worth is not bound to remain the same.