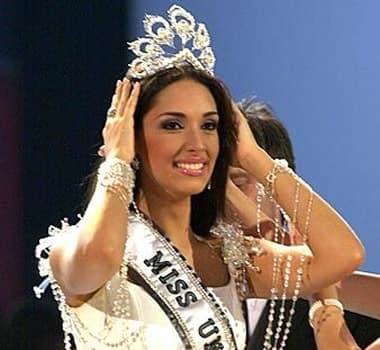 Amelia Vega (full name: Amelia Victoria Vega Polanco and also known as Amelia Vega Horford) is a model, beauty pageant titleholder, singer, and actress from Dominican Republic. She won the title of Miss Universe in 2003. When she got the crown, she became the first ever Dominican entrant to become Miss Universe. Amelia also became the youngest winner of the Miss Universe crown at the age of 18, since 1994. Another record that Ms. Amelia holds is that she is the tallest Miss Universe on record, standing at 1.88 m (6 feet 2 inches).

Born in Santo Domingo, the 2003 Miss Universe titleholder’s parents are Patricia Polanco Álvarez, a licensed pilot and previous national beauty pageant titleholder who represented the Dominican Republic at the Miss World beauty pageant in 1980 and Otto Miguel Vega Rasuk, a general medical practitioner in New York City and Miami. Amelia is a granddaughter of Miguel Ángel Vega Acevedo, a vice-rector of University of Santo Domingo, professor and lawyer. She is also related to Grammy Award winner, singer Juan Luis Guerra, the husband of her aunt Nora Clementina Altagracia Vega Rasuk, which makes her his niece-in-law.

Ms. Amelia is a married lady. Her husband is NBA player, Al Horford, who is also from the Dominican Republic. The couple began dating in 2009 and on December 24, 2011, they walked down the aisle and tied the knot. They have gone ahead to expand their family with three children as of July 2018. Their first child is son Ean Horford Vega, born on February 23, 2015 while their second offspring is daughter Alia Horford Vega, born on November 27, 2016. On July 11, 2018, the couple welcomed their youngest child, also a daughter. They shared the news of her existence on Amelia’s Instagram account via a picture and post.

Amelia Vega as an Entrepreneur

Besides her career in modeling, Ms. Vega is a business lady in the fashion industry. She is the owner of two boutiques by the name “Essence By Amelia Vega”, in Miami.

Ms. Vega has taken part in several beauty pageant competitions in her young adult life. She won the Miss Dominican Republic ahead of the 2003 Miss Universe competition. She proceeded to the competition which was held on June 3, 2003 in Panama and representing her country. She did quite well and was crowned the winner of the competition in Panama. Among her memorable outfits during the competition was her white evening gown that had strings of beads on the sleeves.

After winning the Miss Universe title, Amelia had the task of travelling around the world as she worked with world organizations dealing with HIV/AIDS. The organizations she worked with include: Cable Positive, Global Health Council, amfAR, God’s Love We Deliver as well as the Elizabeth Glaser Pediatric AIDS Foundation. She had the task of collaborating with the international media to promote a better understanding as well as acceptance of HIV/AIDS epidemics and its prevention as well as help increase the global health issue, mobilize funds and increase resources for these organizations.

During her reign as the Miss Universe, she represented the Miss Universe Organization alongside her “sisters” Tami Farrell (Miss Teen USA, of Oregon) and Susie Castillo (Miss USA, of Massachusetts), both also 2003 titleholders. She is also the third among the winners of Miss Universe who have also won the National Costume competition.

As a model, Amelia has graced the cover of various magazine publications, namely: Mujer Unica and Oh! Magazine, local publications from her home country, as well as InStyle, Cosmopolitan, Caras, Harper’s Bazaar, Vanidades, Glamour and Selecta. She has also been the lead image for campaigns by Cover Girl, a beauty cosmetics company.

With her uncle Juan Luis Guerra, Vega made her debut in singing at the Madison Square Garden and American Airline’s Arena. After her time as Miss Universe came ended, she worked as the host of the reality show Voces de América, that aired on Telemundo. She also hosted several editions of “Festival Presidente” and later hosted “Suegras”, a reality show broadcast in the US and Latin America. Her film debut was in 2005, co-starring in the film The Lost City directed by Andy García. She had a special in Homie Spumoni, a motion picture that was released in the summer of 2008, starring Donald Faison and Whoopi Goldberg, among others. She became the host of the Mexican reality show “Segunda Oportunidad”, in 2010, with the Chilean Rafael Araneda[. She also performed the video of “Mi corazoncito” of Dominican bachata music group Aventura.

She released her first single in April 2010 on iTunes. It is known as “Pasa Un Segundito”, followed by the song Smog, an environmental song. She also made an announcement that she would be releasing her album ”Agua Dulce” on August 30, 2011, on iTunes first. To promote the releases, she was the opener for Marc Anthony and Chayanne in their concert.