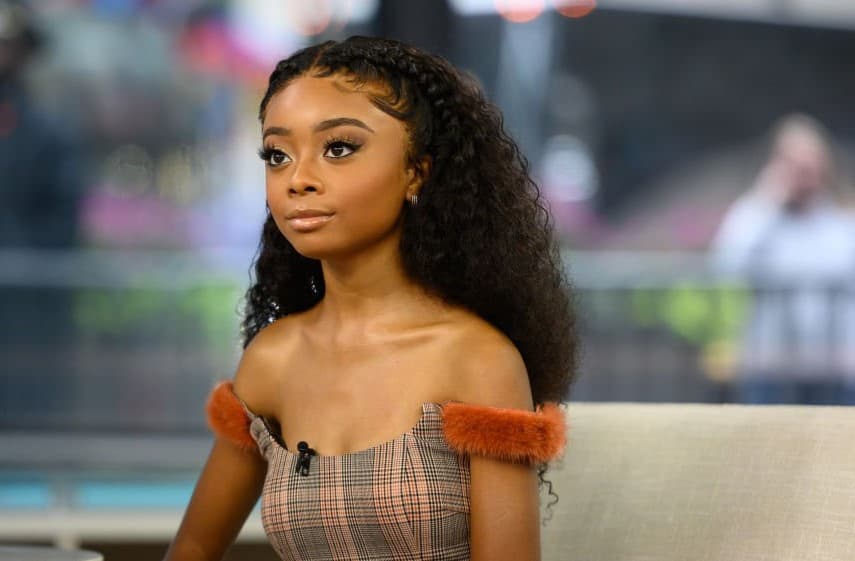 Skai Jackson is a teenage actress, author and well known American YouTuber. She is known for such films like Liberty Kid (2007), her debut film as an actress. However, Skai’s prominence internationally came when she appeared in the Disney Channel series, Jessie, as Zuri Ross from 2011 to 2015 as well as the comedy series Bunk’d from 2015 to 2018. She also ventured into novel writing with her debut novel being released in 2019 and it is known as Reach for the Skai: How to Inspire, Empower, and Clapback.

Who is Skai Jackson’s Mom and Dad? – Parents

Skai’s parents are Jacob Jackson and Kiya Cole. Though the two are divorced, Skai is close to both of them, often posting pictures with her daddy on her Instagram page. It was her mother who held her daughter’s hand as she ventured into the public eye, taking her to a kids modeling agency at just 9 months old. She modeled for a few years until her interest in acting grew and she made her television debut at the age of 9. Her mother Kiya Cole is her career manager Skai also has two younger siblings.

At nine months old, Skai’s mother took her to a kids’ modeling agency and her career as a child model kicked off. Thereafter, she appeared in several commercials for such companies as Pepsi, Coca-Cola, Band-Aid as well as Old Navy.

In 2007, Skai made her debut in television acting in the independent film Liberty Kid. In 2008, she was among the cast of Rescue Me and in The Rebound in 2009. In 2009, she took up another acting role in the pre-school animated series Bubble Guppies on Nickelodeon in the role of Little Fish. Between 2010 and 2011, Skai had guest roles in the series Umizoomi, Boardwalk Empire and Royal Pains.

In the Disney sitcom Jessie, in 2011, she portrayed the character Zuri Ross. Another one of her role came in 2013 as Joetta Watson in the Hallmark Channel television film The Watsons Go To Birmingham. Other film credits to Skai include appearing in an episode of the animated series Ultimate Spider-Man, Bunk’d which is a spin-off of Jessie, K.C. Undercover, Marvel Rising: Initiation, Marvel Rising: Chasing Ghosts, and Marvel Rising: Battle of the Bands.

Bhad Bhabie, real name Danielle Peskowitz Bregoli, is a female rapper and internet personality from the USA. On February 25, 2020, the 16-year-old rapper began a feud with Skai on Instagram. In the videos she posted she talks of the Disney actress as her fan who according to her, often flirts with guys who had been seen with Bhabie. In the video, Bhabie becomes so worked up that she threatens to kill the Bunk’d and Jessie star.

Kiya Cole, Skai’s mother weighed in to defend her daughter against Bhabie. This in turn led to Bhabie’s mother having a heated exchage with Kiya, still on Instagram.

New “Panini” is a 2019 song by American rapper Lil Nas X. Skai is featured in the video. In the music video, she is seen as one trying to escape from the artist as he tries to impress her. Her attempt to escape the rapper with no avail spawned the creation of memes as the song gained international popularity.

Skai does have a YouTube Channel on which she posts her vlog videos. You can find her videos on the following link youtu.be/Us7fkl4Oilk