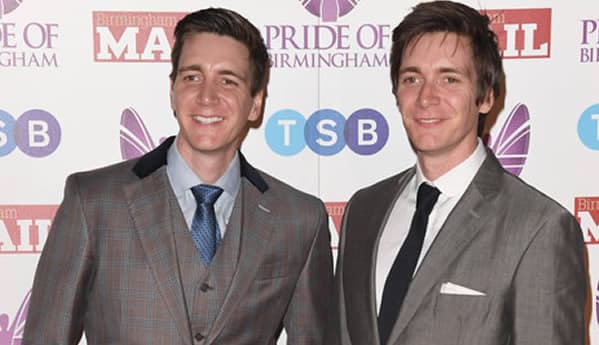 James Phelps is an English actor who is well known for his role as Fred Weasley in the Harry Potter film series from 2001 to 2011, alongside his twin brother, Oliver Phelps, who played the role of George Weasley.

Born as James Andrew Eric Phelps, the Harry Potter actor is 34 years old as of February 25, 2020. He was born in 1986 in Sutton Coldfield, Birmingham, England.

Oliver Phelps (full name Oliver Martyn John Phelps), is the twin brother and only sibling of James. He is an actor too. The twin brothers are the only sons of Martyn Phelps and Susan Spare and they lived in Sutton Coldfield, Birmingham. Between the twins, James is younger by 13 minutes.

The brothers have always been in activities and programs together. They went to primary school at Little Sutton before joining the Arthur Terry Secondary School. The Phelps began acting on the Harry Potter films while they were still in school alongside their fellow school-age cast friends. They had to receive tutoring on set as they spent so much of their time shooting the film series.

The Phelps brothers are both married, with James marrying Annika Ostle on July 23, 2016. Not much is known about the couple’s life as Phelps has done quite a great job at separating his private life from the public.

James and his brother Oliver appeared in the Harry Potter films as Fred and George Weasley, respectively. In the films, they were also twins, brothers of Harry Potter’s  closest friend, Ron Weasley. They characters are described as being comedic though they also played an important role of giving “The Chosen One” the Marauder’s Map. James’ character is killed off before the end of the franchise films.

Speaking about their acting career, the Phelps twins have always talked of their desire to be seen as individuals and not a just a set, hence, they have worked on most of their productions separately compared to what they done together. Post the Harry Potter films, James has been involved in the making of television shows such as The Da Vinci Code, and films such as The Turn among others. He has also appeared with his brother on other productions and events like the Celebrity World Cup Soccer Six, a celebrity football tournament, in May 2006.

The younger Phelps brother is worth millions of U.S. dollars. This is an estimated $1 million from his acting career.