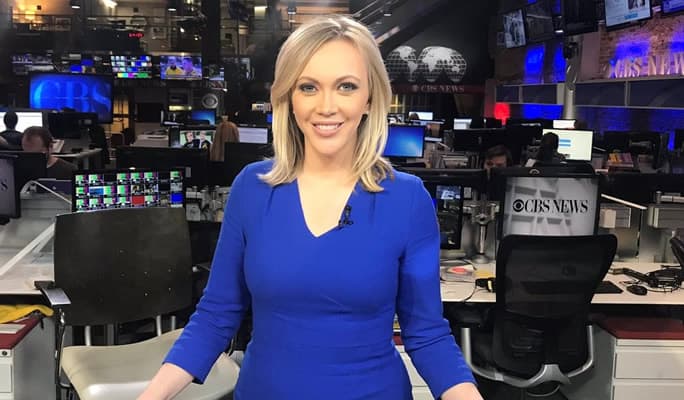 Paula Reid is an American news reporter working for CBS and is also a White House correspondent for CBS News. Paula is known for her coverage of the Hillary Clinton 2016 presidential campaign and the Robert Mueller Special Counsel Investigation. She also gained public attention during the Covid-19 pandemic for her courage in pressing U.S. President Donald J. Trump for answers and accountability for his the lack of preparedness for the health crisis.

Ms. Reid is a graduate of the College of William & Mary with a a bachelor’s degree in psychology. In 2005, Paula earned her Juris Doctor from her Law studies at the Villanova University School of Law. She passed her bar exams in New Jersey and Pennsylvania and went on to work in Louisiana for the Juvenile Justice Project and later interned at the Chester County. She has also has a Masters in Bioethics at the University of Pennsylvania.

The CBS News reporter is married to Mr. Jason Kolsevich since April 2018. The couple wed in Ipswich, MA and now live in Washington, D.C.

In her journalistic career, Ms. Reid has only worked for CBS. She joined CBS News as a secretary in 2010. After a while with the news division of the CBS network, Reid became a journalist. Since then, she has been a part of the team working on broadcasts such as CBS This Morning, CBS Evening News and Face the Nation.

During the 2016 presidential campaign, Reid reported on the Hillary Clinton campaign, particularly the email controversy involving the presidential aspirant. She was also on the ground researching on the Unite the Right rally in Charlotte, North Carolina. The rally would then result to the declaration of a state of emergency.

Utilizing her knowledge in Law, she worked on the CBS News legal team in Washington in 2014. Another high-profile covering began in 2017 for the Special Counsel investigation of Robert Mueller. She did her job and covered the investigation for CBS. During one of the press conferences by the then press secretary, Sarah Sanders, Paula pointed out that the president was not legally permitted to fire Robert Mueller after Sanders alleged that the President could fire Mueller if he wanted to.

After the Trump administration implemented it’s border policies, Reid had an altercation with Donald Trump where she pointed out to him that the family separation policy was different from that of preceding administrations as Trump’s policy punished everyone arriving at the border.

In 2019, Ms. Reid became the CBS White House correspondent. During the coronavirus 2019-20 pandemic, Paula, as other White House correspondents, attended daily press briefings by Trump himself. As usual, she sort to answers from the president and in April 14, 2020, she asked Mr. Trump why his administration had been slow to the pandemic outbreak. She asked him what he did with the time he “bought” after his travel ban on China. She said, “The argument is that you bought yourself some time. But what did you do with that time? You didn’t use it to prepare hospitals, you didn’t use it to ramp up testing. Right now, nearly 20 million are unemployed, tens of thousands of Americans are dead.” To this, Trump replied by calling Reid “fake.” He said, “Look, look, you know you’re a fake. You know that, your whole network, the way that you cover it is fake.” Following the press briefing, Reid told BBC that a press briefing is not a place to make friends.