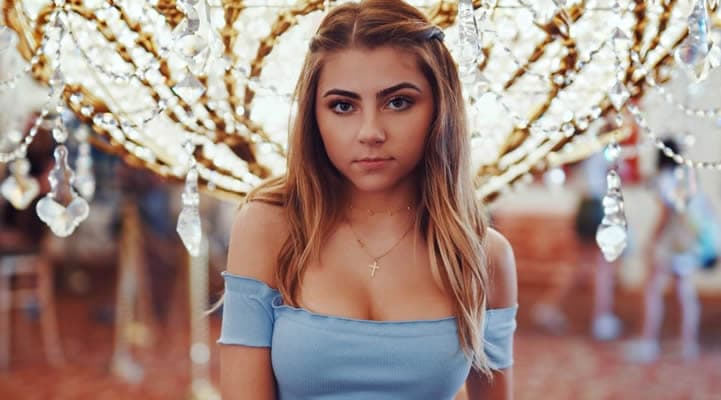 Jada Facer is a singer-songwriter and actress, also a social media influencer from the United States of America. She is most known for her acting role from 2014 to 2015 on the sitcom series Melissa & Joey as Dani, Joe’s daughter. Ms. Facer is also famous for her singing career with several covers from popular songs.

Jada has one sibling, a older brother by the name Kyson Facer. Just like his sister, Kyson is an actor and cover artist, born on 25th July, 1998. As an actor, Kyson is known for the role of Andrew on Nickelodeon’s I Am Frankie, while as a cover artist, he is known for several covers notably “See You Again” by Wiz Khalifa.

Ms. Facer is a singer and songwriter mainly known for singing cover songs. In 2015, she said that her inspiration in music is from Taylor Swift. She is also an actress, a career she began at a very early age. She first auditioned for a role in a local production of the Broadway musical, Annie, in her hometown of St. George, Utah. However, she did not get to join the cast of the musical, a result that fueled her interest to try for another production in New York. Her family then relocated to LA and Jada got signed by an agency.

In 2011, she landed her first major TV role in the film Love’s Christmas Journey. In the movie, she played the role of Annabelle Davis, leading up to her winning the Young Artist Award for Best Leading Young Actress in a TV Movie, Miniseries or Special.

She also took part in the production of the short film Nina Del Tango in 2012. For her role in the film, Jada got yet another nomination for a Young Artist Award for Best Young Actress Ten and Under in a Short Film. Jada’s most memorable role in acting was from 2014 to 2016 when she appeared on the Melissa & Joey, an ABC Family sitcom as Dani Mancini, Joe Longo’s daughter. Since then, she has appeared in other acting roles in such television shows as ABC’s Mistresses, CBS’s Bad Teacher, and Nickelodeon’s Henry Danger.

Jada’s actual net worth is not known to the public, just speculations. That said, it is estimated that Ms. Facer is worth over $250,000.