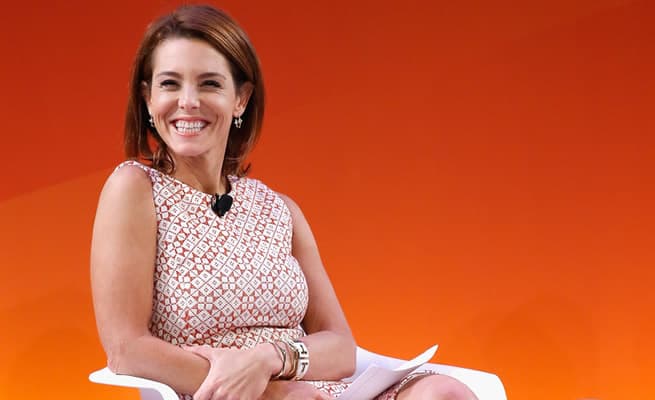 Stephanie Ruhle is a journalist working as a Senior Business correspondent for NBC News and is from the United States of America. Ruhle is also a co-anchor on MSNBC’s Velshi & Ruhle news program as well as an anchor of MSNBC Live with Stephanie Ruhle. Prior to joining MSNBC, Stephanie was a managing editor and news anchor for Bloomberg Television and editor-at-large for Bloomberg News. She was also a co-host for the Bloomberg Television show Bloomberg GO.

Born as Stephanie Leigh Ruhle, the MSNBC anchor is 45 years old as of 24th December 2020. She was born in 1975 in Park Ridge, New Jersey, United States.

Ms. Ruhle is from Park Ridge, New Jersey. She was born to Frank and Louise Ruhle. Stephanie has also lived in Guatemala, Italy and Kenya during her years as a college student for her major. She began her college studies at Lehigh University, graduating in 1997 with a bachelor’s degree in international business. In 2017, she returned to the institution and gave the year’s commencement address.

Yes, Stephanie is married to Andy Hubbard, born as Andrew Lewis Hubbard. Andy is a former hedge funder and co-owner and COO of HausMart, a tech company that was begun in 2018. Stephanie and her husband met while they both worked in the finance world for Credit Suisse. They relationship led to marriage with their wedding in 2002.

The Velshi & Ruhle co-host and her husband are parents to three children, namely; sons Harrison, Reese and daughter Drew Hubbard. The family moved to Manhattan in 2017 from Tribeca. Their family house is a four-story townhouse the Hubbards’ reportedly bought for $7.5 million.

Ms. Ruhle is renown for her work as an anchor at MSNBC and co-anchor of Weekend TODAY on NBC. She also worked as an anchor and managing editor for Bloomberg Television as well as an editor-at-large for Bloomberg News. This position had her co-host Bloomberg, Bloomberg TV’s flagship morning show featuring global thought leaders across business, tech and media.

Before becoming a journalist, Ms. Ruhle pursued a career in finance with her degree in International Business for 14 years. She worked for such organizations as Credit Suisse First Boston, and Deutsche Bank where she started the Global Market Women’s Network, a foundation with the aim of helping women move into leadership roles at the company.

In October 2011, having left the finance world, Ruhle began working for Bloomberg Television as a co-host of the morning program “Inside Track” alongside Erik Schatzker. She also co-hoksted Bloomberg GO with David Westin. In April 2012, Ruhle alongside fellow reporters Mary Childs and Bradley Keoun, broke the story of the London Whale, the trader behind the 2012 JPMorgan Chase trading loss.

She left Bloomberg Television and is since a Shape.com columnist amongst other job roles. She has been vocal on the topic of being a working mother, even sharing her own story on the same. In line with this, in October 2012, she was featured on the cover of Working Mother magazine as well as on the April/May 2013 issue of Fit Pregnancy.

Joining MSNBC in 2016 and working for the network since than is also part of Ruhle’s career as a journalist. She co-hosts Velshi & Ruhle, a weekly morning business program with Ali Velshi. The program airs on saturdays and weekdays. Her hardwork has seen her named as a senior business correspondent at NBC News. She is also a reporter for Today, NBC News Now and digital, and Nightly.

“Haiti: Open For Business” is a 2015 documentary hosted and produced by Stephanie. The documentary focuses it’s content on the happenings of the country five years since a devastating earthquake hit while also exploring the next emerging market.

How much does Stephanie Ruhle make a year?

The MSNBC has an estimated net worth of $5 million and probably more. It is reported that Stephanie earns an annual salary of $2 million from NBC and MSNBC for her work as both an anchor and correspondent.