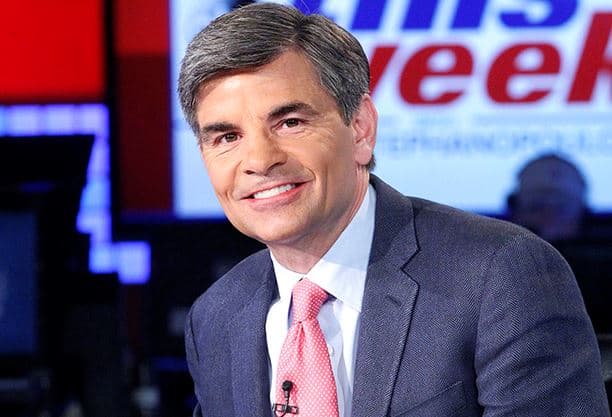 George Stephanopoulos is an American journalist with a career as a TV host and political commentator working for ABC News where is a chief anchor and political correspondent. His anchoring roles on ABC include co-anchoring the ‘Good Morning America’ show alongside Robin Roberts and Michael Strahan as well as being the host of ‘This Week’, a Sunday morning news program on current events. Stephanopoulos is also a former Democratic advisor, a career he led before joining the media industry.

The GMA co-anchor is 59 years old as of February 10, 2020. He was born as George Robert Stephanopoulos in 1961 in Fall River, Massachusetts, United States.

Being raised in a family that was deep-rooted in the Greek Orthodox faith, George also became a follower during his youthful days which also led him to consider becoming a priest like his father.

Who is George Stephanopoulos married to? – Wife

Stephanopoulos is married to Ali Wentworth, an actress, comedian, author, and producer. The couple have been married since November 20, 2001. They met on a blind date in April 2001 and began their relationship shortly afterwards. What followed was their engagement that took place in June 2001 and wedded at the Archdiocesan Cathedral of the Holy Trinity on New York City’s Upper East Side.

Growing up, the senior Stephanopoulos wanted his son to pursue a career as a lawyer or become a priest. George made his father a promise that he would attend law school and ended up in Washington, D.C. working as an aide to Ed Feighan, the then Democratic Congressman of Ohio. George then rose to be Feighan’s chief of staff.

He joined college and completed his studies and in 1988 he was among the campaign staff of U.S. Presidential candidate Michael Dukakis. After the campaign ended, he became the “floor man” for the 1989-1995 U.S. House of Representatives Majority Leader, Dick Gephardt. Stephanopoulos held that position until 1992 when he became a leading member of President Bill Clinton’s presidential campaign.

During Clinton’s first-term in office, Stephanopoulos worked as de facto White House Communications Director from January 20, 1993 to June 7, 1993. From June 7, 1993 he served as the Senior Advisor to the President until December 10, 1996 when he resigned after Clinton’s re-election.

Stephanopoulos took a job at ABC News as a political analyst after he left the White House. He also worked as a correspondent on ABC’s Sunday morning public affairs program, ‘This Week’ for which he is now the host. In December 2005, he was officially named ABC’s “Chief Washington Correspondent” for the show “This Week” and added his name to the show’s title.

For a sometime, the show’s ratings placed it at the third-, fourth-, and sometimes fifth- positions after competitors and the executives considered replacing George with broadcast journalist, Ted Koppel. Luckily, Stephanopoulos interviewed president-elect Barack Obama on January 11, 2009 and the ratings shot up and beating ‘Meet the Press’.

The last Democratic Party presidential debate of the 2008 election cycle was co-moderated by Stephanopoulos. ABC News President David Westin offered Stephanopoulos the role of Diane Sawyer on Good Morning America in December 2009. Stephanopoulos accepted the new role and on December 14, 2009, began co-anchoring GMA. In January 2010, as the permanent host of This Week, Stephanopoulos revealed that it would be his last broadcast. It was revealed that Stephanopoulos would return as host of the week in December 2011, after Christiane Amanpour left the show in the midst of sagging ratings. He signed a contract worth $105 million to remain with ABC until 2021.

Stephanopoulos reportedly earns a salary of around $15 Million annually. He has an estimated net worth of $40 Million as of 2020.