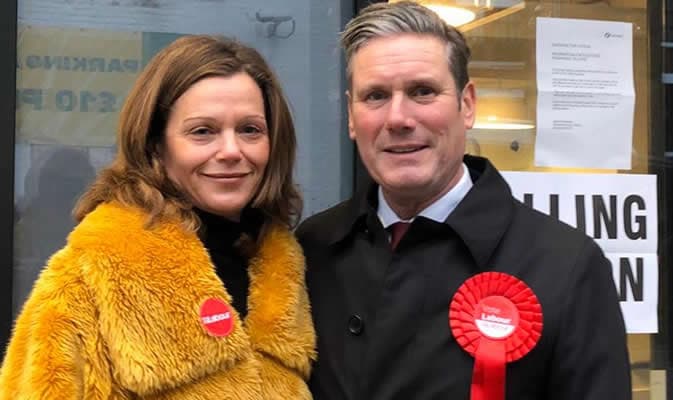 Who is the wife of Sir Keir Starmer, the new leader of Labour

Victoria Starmer is a solicitor and the wife of Sir Keir Starmer, the new leader of the Labour Party as of April 4, 2020. Victoria and Keir have been married since 2007 and live in Camden, North London. Her husband is a politician and millionaire barrister from London. He used to be a human rights lawyer and is a co-founder of Doughty Street Chambers.

Victoria and Keir are parents to two children from their marriage. They are; son (10 years old) and daughter (8 years old). The family lives in North London, reportedly in a house worth £1.75million.

Keir Starmer and the Labour Party

Sir Keir had faced competition from fellow hopefuls Lisa Nandy and Rebecca Long-Bailey to win the leadership position. Labour’s deputy leadership position has been won by shadow Education Secretary Angela Rayner. The leadership contest ran for three months until Keir won. His victory was announced via email due to the COVID-19 outbreak.

Born in the U.K., Mr. Keir is the son of a toolmaker, Rod Starmer, and a nurse, Josephine Starmer. His parents named him after Keir Hardie, the first leader of the Labour Party. For his education, Keir is scholar of Leeds and Oxford University where he studied law.

Upon completion of his college studies, Mr. Keir became a human rights barrister and built a name for himself in his career path. In 1990, he co-founded Doughty Street Chambers before taking up the job of being an advisor of Helen Steel and David Morris for their legal battle with McDonald’s. This case later became known as the McLibel case. Keir is also known for his fight against the death penalty in Africa, the Caribbean and Taiwan. Still in his career in law, Keir worked as a human rights adviser to the Policing Board in Northern Ireland and monitored the Police Service of Northern Ireland’s (PSNI) compliance with the Human Rights Act.

In the year 2008, Mr. Starmer was appointed to be the Director of Public Prosecutions as well as the Head of the Crown Prosecution Service for Wales and England. Keir was awarded a knighthood title that earns him the title Sir, a title he doesn’t not prefer, for “services to law and criminal justice.” In May 2015, he got elected as an MP for St Pancras and Holborn while in October 2016, he became the Shadow Secretary of State for Exiting the European Union. Keir was sworn in to the “Her Majesty’s Most Honourable Privy Council” in 2017.

In January 2020, Mr. Starmer made his decision to run for the Labour party’s leader position by announcing his candidacy. That marked the beginning of his campaign to take over from Jeremy Corbyn. The campaign took about three months and the new party leader was announced on 4th April, 2020, with 56.2% of the vote being in favor of Starmer.