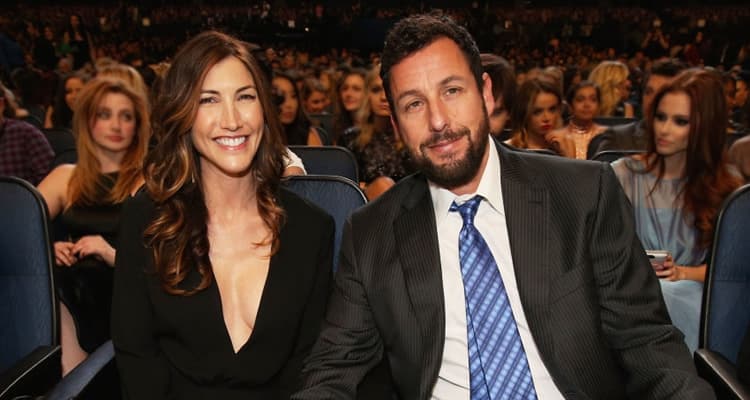 Jackie Sandler is an American former model and actress who is also the wife of the hilarious actor, Adam Sandler. As an actress, Jackie is known for her roles in films like Grown Ups, Grown Ups 2, Hotel Transylvania, 50 First Dates, and Just Go With it.

Jackie and Adam met in 1999 on the set of the movie, Big Daddy. Jackie had been introduced to Sandler by his friend Rob Schneider for a role in a movie. Adam offered Jackie a role in the film Big Daddy and they worked on other movies together, thereafter. They grew close to one another and soon began dating. In 2000, she converted to Judaism from Christianity.

Shortly afterwards, they took their relationship to another level by getting engaged. They then got married on 22nd June 2003 at Dick Clark’s oceanfront Malibu estate with such A-list actors as Rob Schneider, Jennifer Aniston, Rodney Dangerfield, being present. On her wedding day, Jackie wore a Carolina Herrera gown featuring a draped bodice and spaghetti straps.

What is Jackie Sandler’s Birth name?

Before being married and acquiring the name Sandler, Jackie was born as Jacqueline Samantha Titone. Her parents are Lila Titone and Joseph Titone. She has Italian roots. Her parents got divorced in the 90s and as a result, Jackie became estranged from her father.

Jackie grew up in Florida and when she was in high school, she got into modeling. Steadily, she became known within the nation and then internationally, for her modeling with big fashion companies. In the late 90s, she met Rob Schneider who introduced her to acting. Successfully, in 1999, Jackie appeared as Sally in the movie Deuce Bigalow: Male Gigolo. The movie became a hit and Schneider talked to his friend Adam Sandler about the good work done by Jackie. Adam then offered his now-wife, a role in the 1999 movie, Big Daddy.

In the Big Daddy movie, Jackie played the role of a waitress and also a music assistant. In 2000, she was cast in another film with Adam Sandler, known as Little Nicky. This film featured other well known actors such as Quentin Tarantino, Reese Witherspoon and Patricia Arquette. It was from their interactions in the acting industry that led to Jackie and Adam becoming close to one another and in 2001, they began their romantic relationship.

Another role for Jackie came in 2002 in the animated movie, “Eight Crazy Nights” as the voice of Jennifer. This was a main role and her first major role in a film. In 2003, she again appeared in another film, Duplex, as a bartender. This role was given to her by Danny DeVito.

In 2004, now as the wife of Adam, she got another movie role in “50 First Dates”, thanks to her husband. This hit comedy/romance movie starred both Drew Barrymore and Adam Sandler. After Sandler put in a good word for Jackie, Peter Segal who was the film’s director, offered Jackie the role of the dentist. She also appeared on the TV show, VH1: All Access: Celebrity Weddings in 2004, as herself.

Jackie Sandler as a Model

During her high school years, Jackie ventured into modeling part-time and after completing her studies, she moved to Brazil to become a full-time model. She excelled in her work with one brand and rose to stardom, both nationally and internationally. However, her career interest shifted from modeling to acting after she was introduced to show business.

Like so many celebrities, Jackie’s actual net worth has not been declared publicly. However, her worth is estimated to be in millions of U.S. dollars, about $5 million.

Having a voice as a celebrity, Jackie has shown support for various organizations such as the EB Medical Research Foundation that is dedicated to women around the world. With her husband, Jackie has contributed to the Boys and Girls Clubs of America.