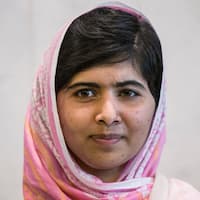 Who is Malala Yousafzai and why is she famous? – Biography

Malala Yousafzai is a Pakistani girl education campaigner who won the Nobel Peace Prize in 2014. After being wounded in 2012 for resisting Taliban restrictions on female education in her home country of Pakistan, she became an international icon of the battle for girls’ education.

How old is Malala Yousafzai? -Age

What is Malala Yousafzai real name?

She was born as Malala Yousafzai. Her married name is Malala Yousafzai Malik. her first name Malala (meaning “grief-stricken”) is a name given to her after Malalai of Maiwand, a legendary Pashtun poet and warrior woman from southern Afghanistan.

She was born to Ziauddin Yousafzai and Toor Pekai Yousafzai. Her family is of Pashtun origin and belongs to the Yusufzai tribe of Sunni Muslims. She shared a home with her two younger brothers, Khushal and Atal, as well as her parents, Ziauddin and Tor Pekai, and two hens in Mingora.

Pashto, Urdu, and English are her native languages. Yousafzai was mostly educated by her father, Ziauddin Yousafzai, a poet, school owner, and educational crusader who runs the Khushal Public School chain of private schools. She once stated in an interview that she wanted to be a doctor, but her father later persuaded her to pursue a career in politics instead. After her two brothers had gone to bed, Ziauddin referred to his daughter as something exceptional, allowing her to stay up late at night and talk about politics.

Did Malala Yousafzai go to school as a child? – Did Malala have a good education?

Yousafzai attended Birmingham’s all-girls Edgbaston High School from March 2013 until July 2017. She achieved 6 A*s and 4 As at GCSE in August 2015. She studied Geography, History, Mathematics, and Religious Studies at A Level. Yousafzai was interviewed at Lady Margaret Hall, Oxford in December 2016 and received a conditional offer of three As in her A Levels; she was accepted to study Philosophy, Politics, and Economics in August 2017. She also applied to Durham University, the University of Warwick, and the London School of Economics (LSE) (PPE). Greta Thunberg, a climate activist, visited Oxford University in February 2020 to see Yousafzai. Yousafzai announced on June 19, 2020, that she has completed her PPE degree at Oxford and graduated with honors after clearing her final exams.

When was Malala Married? – Husband

Yousafzai married Asser Malik, a Pakistan Cricket Board manager, in Birmingham on November 9, 2021. The couple married at a small Islamic ceremony called a nikkah in Birmingham, England.

How old was Malala when she was shot?

As Yousafzai’s celebrity grew, so did the dangers she faced. Death threats were printed in the newspapers and placed under her door. [59] She began to get threats on Facebook, where she was an active user. Finally, a spokesman for the Tehrik-i-Taliban Pakistan declared they were “forced” to act. Taliban leaders unanimously agreed to assassinate her at a meeting in the summer of 2012.

A Taliban gunman shot Yousafzai as she traveled home on a bus after passing an exam in Pakistan’s Swat Valley on October 9, 2012. At the time, Yousafzai was 15 years old. A masked gunman, according to sources, yelled: “Which of you is Malala Yousafzai? If you don’t speak up, I’ll shoot you all.” Yousafzai was shot with one bullet after being identified, which traveled 18 inches (46 cm) from the side of her left eye, through her neck, and into her shoulder. Two additional females were injured in the shooting: Kainat Riaz and Shazia Ramzan, both of whom were able to speak to reporters and share details about the incident after the shooting.

A bullet exited her body after passing through her head and lodged in her shoulder. Doctors operated to remove the bullet and portion of her skull to allow for swelling. Doctors stated she had a 70% chance of surviving in October 2012, and they intended to take her to Germany for treatment. Instead, she was transferred to Rawalpindi’s Armed Forces Institute of Cardiology. She arrived in the United Kingdom on October 15th for further treatment. Her facial nerve was repaired, and she had more surgery to reconstruct her skull and restore her hearing with a cochlear implant. She said in July 2014 that after surgery, her face had returned up to 96 percent of its facial nerve and that she was now stable.

Malala was awarded the Nobel Peace Prize in 2014 alongside Kailash Satyarthi, an Indian child rights activist. She received the award for her efforts to end the oppression of children and young people and to ensure that all children have access to education. She is the youngest Nobel Laureate at the age of 17.

What is Malala’s net worth?

She was greatly motivated by her father’s beliefs and humanitarian endeavors, citing Muhammad Ali Jinnah and Benazir Bhutto as role models. She created a blog for the BBC Urdu under a pseudonym in early 2009, when she was 11–12 years old, chronicling her life during the Tehrik-i-control Taliban’s of Swat. As the Pakistani military invaded in the region the next summer, journalist Adam B. Ellick produced a New York Times documentary about her life. She rose to notoriety after giving interviews in print and on television, and activist Desmond Tutu nominated her for the International Children’s Peace Prize.

Yousafzai and two other girls were shot by a Tehrik-i Taliban Pakistan gunman on a bus in the Swat District after sitting an exam on October 9, 2012, in revenge for her activism; the gunman escaped the scene. Yousafzai was shot in the head and was taken to the Rawalpindi Institute of Cardiology, where she remained unconscious and in critical condition until her condition improved enough for her to be transported to the Queen Elizabeth Hospital in Birmingham, UK. Her assassination attempt provoked a worldwide outpouring of support. In January 2013, Deutsche Welle stated that she may have become “the world’s most famous teenager.”

A fatw against those who tried to assassinate her was issued by a group of 50 senior Muslim clerics in Pakistan weeks after the attempted murder. Governments, human rights organizations, and feminist groups unanimously condemned the Tehrik-i-Taliban Pakistan. Officials from the Tehrik-i-Taliban in Pakistan retaliated by criticizing Yousafzai even more, signaling intentions for a possible second assassination attempt, which they justified as a religious requirement. Their actions drew even more international condemnation.

Yousafzai became a notable advocate for the right to education after her recovery. She and Shiza Shahid co-founded the Malala Fund, a non-profit organization, in Birmingham. I Am Malala, an international best seller, was co-authored by her in 2013. She was awarded Pakistan’s first National Youth Peace Prize in 2012, as well as the 2013 Sakharov Prize.

She and Kailash Satyarthi of India were co-recipients of the Nobel Peace Prize in 2014. She was the youngest Nobel Laureate ever at the age of 17. He Named Me Malala, an Oscar-nominated documentary, was about her in 2015. She was named one of the most influential persons in the world by Time magazine in the years 2013, 2014, and 2015. She was given honorary Canadian citizenship in 2017 and became the youngest person to speak in the House of Commons.