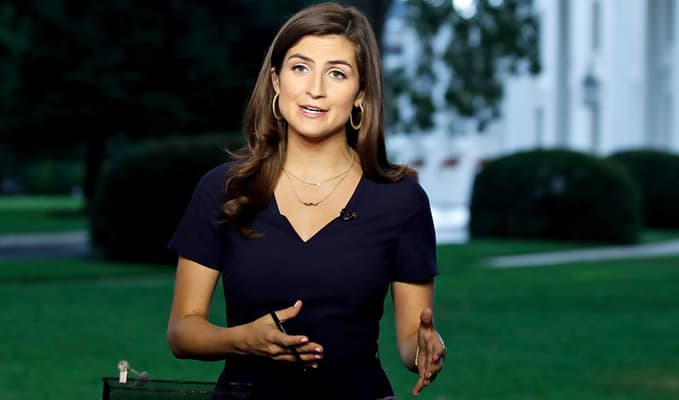 How old is Kaitlan Collins? – Age

Kaitlan was born and raised in a family of four. Her parents’ names are not known publicly neither do we know much of her private family life. However, she is known to be the eldest of her siblings, with a younger sister and two younger brothers too.

As mentioned, Kaitlan is a private person with much of her personal life away from the cameras. In regards to her relationship, the CNN reporter is rumored to be engaged to a guy known as Will Douglas. The two have been alleged to have begun their relationship in 2016. With no confirmations or word from Ms. Collins on such matters, her relationship status is not certainly known.

Kaitlan attended the University of Alabama for her Bachelor of Arts in journalism and political science degree. She graduated from the institution in May 2014 and by June of the same year, she landed a job at The Daily Caller. She joined the website as an entertainment reporter and in January 2017, she was promoted to the White House correspondent position. With the new position, Kaitlan was able to cover the first few months of the Trump administration for The Daily Caller.

Despite her new position at The Daily Caller, Kaitlan left for CNN in 2017, as a White House correspondent too. She has covered stories involving various political leaders in the U.S. such as the President, travelling with him to a couple of countries.

As a White House correspondent, Ms. Collins has experienced and been involved in some conflict with the Trump administration during or before press briefings. For example, she was barred from one of the administration’s press conferences in July 2018, in the White House Rose Garden. Speaking about the issue, Kaitlan said that the administration barred her from the briefing after she asked Trump about Vladimir Putin, the Russian president, and Michael Cohen, Trump’s former attorney. The administration defended it’s decision through comments given by then press secretary Sarah Sanders and the President’s advisor Kellyanne Conway as well as the then deputy chief of staff for communications, Bill Shine.

Another instance was in April 2020 during one of the Covid-19 White House press briefings when President Trump claimed that he has total authority as the President of the United States. She questioned him about his claim and as usual, the President did not have kind words for her.

In late April 2020, at yet another White House briefing still on the coronavirus pandemic state of the nation, Kaitlan was asked to move from a front row seat to a seat at the back of the room and swap with another journalist representing a different news outlet at the stated seat. Kaitlan as well as the other reporter refused to comply with the White House official’s order. The front row seat was assigned to Ms. Collins, next to other correspondents from major networks such as NBC, and CNN, following the social distancing guidelines set and a plan managed by the White House Correspondents’ Association (WHCA) which was also agreed to by White House officials the previous month. The official then tried to summon the Secret Service but the move did not amount to anything.

As much of her life that is not part of the daily news and part of her personal business, Kaitlan’s salary and net worth is not in the public knowledge. However, we can at least take a guess and say that she earns a good amount being part of a major news network