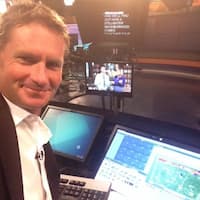 Jonathan Yuhas is a certified meteorologist from the United States working at KSTP – TV. He joined the 5 EYEWITNESS NEWS weather team in August of 2011.

How old is Jonathan Yuhas? – Age

He was born in Minneapolis, in the United States. His date of birth is not revealed.

Jonathan was raised in Edina and attended Edina High School. He studied meteorology and aviation at the University of North Dakota in Grand Forks.

Jonathan is married to Joy Lim Nakrin, a journalist. They have two children namely; Max and Maggie and a cattle dog named Foster.

In August of 2012, Jonathan suffered his first pulmonary embolism. His blood clot that travels from the bloodstream to the lungs was blocked, which was a very serious condition. Even if he survived the battle in June 2020, he will face another attack. He has recently experienced some health issues with his small intestine.

He has worked as a Meteorologist at KAAL in Austin/Rochester, KEYC in Mankato, KCRA in Sacramento, and KARE in the Twin Cities for nearly 20 years. Jonathan’s interest in weather began when he was seven years old. A tornado passed near their Omaha neighborhood while they were visiting cousins. He began learning everything he could about tornadoes and Minnesota weather when he returned home to the Twin Cities.

He has chased tornadoes from Minnesota to Texas throughout his career. He has completed 25 marathons and holds a pilot’s license. He worked as a reserve officer for the Edina Police Department for five years and has trained numerous police and fire departments on how to respond in severe weather situations.