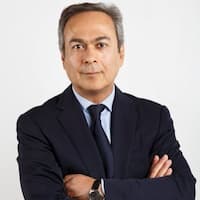 Farhad Moshiri is a British-Iranian businessman who lives and works in Monaco. He is the chairman and a shareholder of USM, a diversified Russian holding company with significant holdings in metals and mining, telecommunications, technology, and the internet.

How old is Farhad Moshiri? – Age

His parents left just before the revolution of 1979. Majid’s father was an army doctor who trained as a pathologist before becoming a senior military judge, and his mother’s family owned Kayhan, Iran’s leading publishing house. He studied economics and statistics at University College London before becoming a chartered certified accountant in the United Kingdom.

Nazenin Ansari, his ex-wife, is a London-based Iranian journalist who works as the managing editor of Kayhan London, a weekly Persian-language newspaper, and as a series producer for Manoto, an international free-to-air Persian language TV channel. They have two kids.

How did Farhad Moshiri make his money?

How much is Farhad Moshiri worth?

He has an estimated net worth of £1.7bn.

Moshiri announced in February 2016 that he had sold his stake in Arsenal Football Club to Red & White Holdings partner Usmanov in order to raise the capital needed to launch a takeover bid at Everton F.C. The club officially confirmed Moshiri’s purchase of a 49.9% stake in the club on February 27, which was ratified by the Premier League two weeks later. Moshiri increased his ownership of the club to 94% in January 2022.

Moshiri previously worked for Ernst & Young, Pannell Kerr Forster, and Deloitte & Touche, most recently as a senior manager in Deloitte’s audit division. Between 1993 and 2006, he was Executive Director of GNE Group plc, and from 2000 to 2008, he was Chief Executive Officer of Europe Steel Limited (formerly Europe Steel plc). He was the chairman of Metalloinvest from 2006 to 2013, after which he was appointed chairman of USM Holdings.

Moshiri and longtime business partner Alisher Usmanov were co-owners of Red & White Holdings, which purchased 14.65% of Arsenal F.C. shares from former club vice-chairman David Dein in August 2007. A week after Moshiri announced his desire for a 25% stake in Arsenal, Red and White Holdings increased their stake to 21% on September 18, 2007, and 23% on September 28, 2007. As of June 2012, Red and White Holdings had acquired at least 29.72% of the company. “They’ve said previously they are not going to make a bid for the company and they want to be long-term shareholders,” Arsenal managing director Keith Edelman told BBC Radio 5 Live.