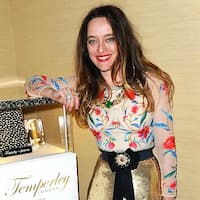 Alice Temperley MBE is a British fashion designer who lives in Ilminster, Somerset. Temperley London, her fashion label, debuted in 2000. The Guardian reported in 2006 that she had been dubbed “the designer making the biggest waves in British fashion” by American Vogue.

How old is Alice Temperley? – Age

She is the daughter of Julian Temperley and is the sister of Matilda Temperley. She grew up on her parents’ cider farm in Somerset and attended the Royal College of Art and Central Saint Martins. She is the granddaughter of Neville Temperley, a mathematical physicist.

Matilda Temperley is her blood sister. Matilda works as a Documentary and fashion photographer.

While working as a waitress at the Met Bar in Mayfair in 1998, she met her husband, Lars von Bennigsen. They married in 2002 in a 1920s-style wedding that was covered by Vogue UK. Temperley gave birth to her first child, a son named Fox London Temperley von Bennigsen Mackiewicz, five days after the Temperley London SS09 fashion show in September 2008. In 2012, she and her husband divorced.

Temperley launched her Temperley London label in 2000, a year after graduating from the Royal College of Art. Alice is still in charge of the creative direction of this British independent brand, which is now in its twentieth year of operation. Temperley Bridal, which debuted in 2006, is distinguished by ethereal, timeless silhouettes inspired by bygone era romance and decadence. The brand currently operates standalone stores, including a Bridal Boutique in its flagship store in Somerset, as well as stores in Chelsea, Marbella, Dubai, and a Bridal Showroom in Fitzrovia.

Temperley London was reported to be producing 10 collections across three lines, including cruise and pre-fall collections, in 2012. Somerset by Alice Temperley, a fourth line, was introduced as a high-street collaboration in 2012.

Temperley hosted her first fashion show in 2003 in Notting Hill, London. She relocated her fashion shows to New York in 2005, where she remained until 2011. (with the exception of the Spring Summer 2009 show in London). The British Museum hosted the brand’s tenth anniversary exhibition. She presented her collections through multimedia installations rather than traditional catwalk shows for four consecutive seasons, from 2009 to 2011.

Temperley Bridal first appeared in 2007. Temperley London launched ‘ALICE by Temperley’ in the spring of 2010, a diffusion line aimed at a younger demographic and featuring more affordable and casual pieces. Harvey Nichols, Selfridges, and Harrods in London, Neiman Marcus in New York, Isetan in Japan, and Net-A-Porter online all carried the collection. Under CEO Ulrik Garde Due (who joined in 2013), this line was closed in order to focus on “one brand and one message.”

Temperley has five standalone boutique stores, including the head office in Ilminster, Somerset, as well as a flagship on Mayfair’s Bruton Street and an occasion-wear boutique in Notting Hill. There are also standalone stores in Los Angeles, Dubai, and Doha. Temperley London is also available in 300 stores across 37 countries. Somerset by Alice Temperley, the designer’s first high-street collaboration, debuted in September 2012 with British retailer John Lewis. The line is the department store’s fastest selling fashion collection in its history. She has won several awards, including English Print Designer of the Year at Indigo in Paris in 1999 and Elle magazine’s Best Young Designer of the Year Award in 2004. In 2006, she was named one of the top 35 female business leaders in the United Kingdom, and in 2011, she was named Designer of the Year at the Hollywood Style Awards.

Temperley was awarded an MBE for services to the fashion industry in the 2011 New Year Honours. The Duchess of Cambridge and her sister Pippa Middleton have both worn Temperley designs. Pippa Middleton wore a floor-length green Temperley gown to her sister’s wedding reception. Madonna, Beyoncé, Penélope Cruz, Thandiwe Newton, and Portia Freeman have all worn her gowns. Eva Mendes, Halle Berry, and Sarah Michelle Gellar are also fans of the brand.