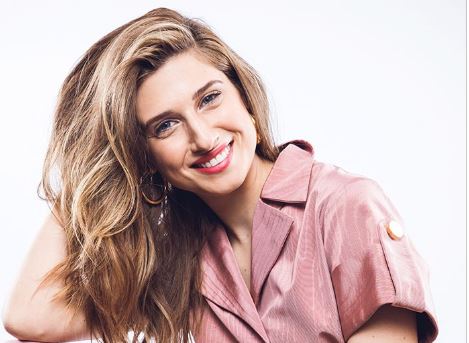 Emily Arlook is an actress as well as film writer from Los Angeles who is known for her roles in the ABC sitcom Grown-ish as Nomi, in Just Add Water (2008) and in The Good Place (2016).

How old is Emily Arlook? – Age

Emily was born and raised in a family three children. She and her older sister, Rachel Arlook (born in 1988) as well as her younger brother, Ethan Arlook (born in 1992) were born to Richard Arlook and Deborah Arlook. Richard is known for being a member of ‘The Arlook Group’.

After completing high school, Emily wanted to pursue a career in acting, hence, she enrolled at The Lee Strasberg Theatre and Film Institute where she studied and later earned her degree.

Emily is married to American film producer, writer and actor, Will McCormack. Not much is known about the couple’s lives as they are both guarded, however, they often post pictures together as well as step out in each other’s company once in a while.

Does Emily Arlook have a Baby?

At the start of the third season of Grown-ish, Arlook’s character Nomi is said to be pregnant from a one-night stand she had. As a result, she leaves school, Cal U, and goes back home as she is dealing with her pregnancy. In real-life, Emily is a mother. She has not revealed the face of her precious child nor has she responded to questions from curious people on her posts where she is seen holding the young child.

Among Emily’s most famous acting roles is of her as Nomi in the American sitcom ‘Grown-ish’, a spin-off of another popular sitcom known as ‘Black-ish’. Grown-ish is also a creation of writer Kenya Barris and has been airing since January 3, 2018 and has 3 seasons as of late 2020.

Emily is an actress on the series appearing as Nomi Seagal, a Jewish American who is bisexual. She revealed that before she landed the role, she auditioned five times in one week for the character. She also mentioned that the character is “fun to play” because she is “pretty free-spirited and wild”.

Emily Arlook on her Bisexual Representation on Grown-ish

During an interview, Arlook spoke about her character Nomi Seagal’s sexuality. It has been observed that bisexuality is often not portrayed realistically but rather glazed over in films. Speaking of the issue she said, “People are bisexual, so to ignore the truth of humanity and our own reality of sexuality and romantic preferences, or to not have that on