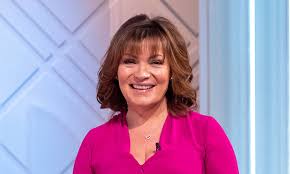 Lorraine Kelly is a television presenter, interviewer, and journalist from Scotland. She is notable for presenting various ITV TV Shows including; GMTV, This Morning, Daybreak, Good Morning Britain, The Sun Military Awards, STV Children’s Appeal, and her eponymous program Lorraine.

How old is Lorraine Kelly?- Age

The Scottish television personality is 61 years old as of 3 August 2021. She was born on 30 November 1959 in Gorbals, Glasgow, United Kingdom.

She is the daughter of Anne Kelly, who is of the Catholic faith, and protestant John Kelly, a former television repairman. She has a brother Graham Kelly.

Lorraine is married to Steve Smith. Unlike her, Steve is not a public figure but working behind cameras as a television cameraman, the couple has a daughter Rosie Smith, born on 8 June 1994 in High Wycombe, United Kingdom. Her husband is a football fan who influenced Kelly making her be a fan of the Scottish football team Dundee United since 1987.

Kelly joined TV-am in 1984 as a correspondent for Scotland. She covered the Pan Am Flight 103 crash in 1989. In 1990, alongside Mike Morris, she became a central presenter of Good Morning Britain. Kelly helped launch GMTV in January 1993 by presenting a number of programmes. Kelly went on maternity leave in June 1994, but soon after she was sacked from the main presenting roles, she returned in November 1994 to do a slot for mother and baby. In November 2009, after buying The Walt Disney Company’s 25 percent stake, ITV plc took full ownership of the broadcaster. In July 2010, before leaving, Kelly hosted her last show.

From 3 September 2012 onwards, she co-hosted Daybreak with Aled Jones. Kelly revealed in February 2014 that she would quit Daybreak to concentrate on Lorraine, which she started hosting on 28 April 2014, five days a week. With Lorraine Kelly, Kelly presented a four-part series for Channel 5 called Penguin A&E, which began airing on 10 May 2016. Kelly co-presented Wedding Day Winners on BBC One with Rob Beckett in 2018. She made a cameo in Coronation Street in May of 2019. Kelly hosted the Hogmanay Party, which aired on New Year’s Eve in 2014 and 2015.

In both 2003 and 2004, during the selection of votes at the Eurovision Song Contest, she was the national spokesperson for the United Kingdom. From 2004 to 2006, Kelly co-presented This Morning with Phillip Schofield. In 2006, Kelly filmed Secrets Revealed-DNA Tales, produced by STV Productions and broadcast on Sky Real Lives, an ITV documentary program. In 2010, Kelly presented Lorraine Kelly’s Big Fat Challenge on Bio, a six-part documentary series.