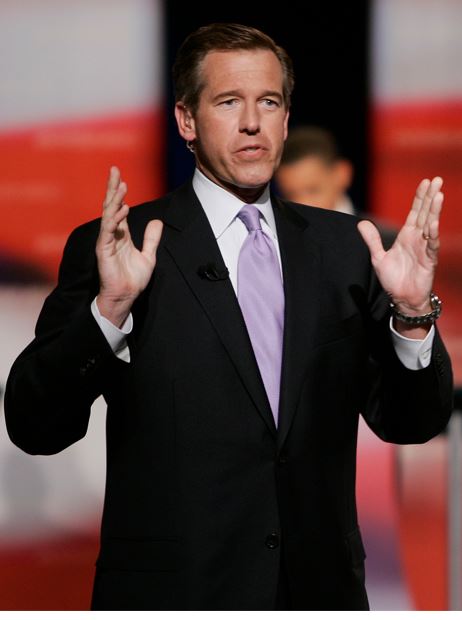 Brian Williams born in the United States as Brian Douglas Williams is a journalist working as the MSNBC chief anchor and host of its nightly wrap-up program, The 11th Hour with Brian Williams. He regularly appeared on The Daily Show as a celebrity guest interviewed by Jon Stewart.

He was born to Gordon Lewis Williams and Dorothy May Pampel. He has two-three siblings; brothers David Williams, Richard Williams, and a sister; Mary Jane Esser.

Who is Brian Williams married to?-Wife

Williams is married to n June 7, 1986Gillan Stoddard. The couple married on n June 7, 1986, and their wedding venue was at the First Presbyterian Church of New Canaan, Connecticut.

Williams and Jane have two grown children who have also built their names. Their daughter actress Allison Williams was born on 13 April 1988 in New Canaan, Connecticut, United States. She was married t entrepreneur Ricky Van Veen but later separated. Their son, Doug Williams is the late-night anchor of Geico SportsNite on SportsNet New York.

What is the net worth of Brian Williams?-Salary

Williams earns $10 million per year. He has an estimated net worth of $40 million as of 2020. He has made his fortune from his career as a news anchor.

Does Brian Williams have a degree?-Education

Williams studied at Mater Dei High School in the New Monmouth area of Middletown, a Roman Catholic high school. While in high school, he was a volunteer firefighter at the Middletown Township Fire Department for three years. He was also the editorial editor for the school newspaper during high school.

After high school, before going to the Catholic University of America and then George Washington University, Williams attended Brookdale Community College. He did not graduate, subsequently interning with President Jimmy Carter’s administration.

Williams first worked in broadcasting was in 1981 at KOAM-TV in Pittsburg, Kansas. He joined NBC News in 1993 and was the chief  White House correspondent. He started working with Brian Williams, reporting on MSNBC and CNBC, as an anchor and managing editor of The News in 1996.

In 2007, Williams was named one of the 100 most influential people in the world by Time magazine. Williams won 12 News & Documentary Emmy Awards while anchoring the Nightly News. Williams was suspended from broadcasting for six months in February 2015 for misrepresenting his experience during the 2003 invasion of Iraq. It was revealed on October 4, 2011, that Williams would be the host of Brian Williams’ Rock Center. On October 31, 2011, Rock Center was a news magazine program that premiered.

Due to low ratings, the show was canceled on May 10, 2013. On February 4, 2015, Williams apologized for and rejected his disproven Iraq War claim, which he told on a January 30th, 2015 Nightly News broadcast. He reported that after being hit by an RPG, a military helicopter he was flying in was “forced down after being hit by an RPG” The tale was criticized by a flight engineer onboard one of the helicopters that had been targeted. There were other soldiers who soon came forward to report that Williams was not in the helicopter that was under fire.

NBC News President Deborah Turness removed Williams from his position as Managing Editor and Anchor of the Nightly News without pay for six months on February 10, 2015.In a podcast episode entitled Free Brian Williams journalist Malcolm Gladwell reexamined the case. As a chief anchor, Williams returned to MSNBC in September 2015. The role of chief election anchor was also added by Williams in January 2016. He is currently anchoring weekly news and political wrap-up show with Brian Williams, titled The 11th Hour. Williams led the network’s coverage of the general election in the United States in 2020. Williams made regular guest appearances on NBC’s 30 Rock television comedy. On the West Coast iteration of the 30 Rock season 6 live show in April 2012, Williams played a news reporter reporting the story of Apollo 13.

Williams appeared on The Daily Show and Saturday Night Live. He has also appeared with Jimmy Fallon and Conan O’Brien on Late Night. In 2010, he did a skit on the CTV Olympic set with Brian Williams, CTV Sports’ Canadian sportscaster. He is the only sitting network news anchor to host the November 3, 2007 season 33 premiere of SNL. Williams has also made several appearances with David Letterman and Regis Philbin on the Late Show. In May 2005, Williams was the first speaker at Bates College and spoke at the beginning of May 2012 at George Washington University. He has written for magazines, including Time magazine and The New York Times.