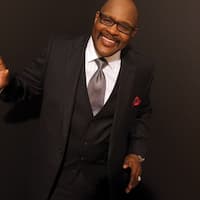 Bishop Marvin Winans is an actor pastor and gospel singer from the United States well-known for being a member of the musical Winans family and for his recurring appearance in Tyler Perry’s hit show House of Payne.

Delores Ransom and David Glenn Winans Sr., who reported as “Mom and Pop Winans,” had Winans as the fourth of ten children. His siblings David II, Carvin, who is his fraternal twin, Benjamin Winans, Daniel Winans, Michael Winans, Ronald Winans, Priscilla Winans, Deborah Winans, and Angelique Winans are all musically talented and have pursued careers in the music industry as musicians, songwriters, and producers.

Marvin was married to Viviane Bowman, with whom he had a 16-year marriage before their divorce in 1995. His sons, Marvin Jr. (Coconut) and Josiah Winans, as well as his stepson Mario (Skeeter), are all musicians. Mario is an R&B singer and producer. Marvin Jr., who used to be a member of Winans Phase 2, is now a solo artist and producer, and Josiah Winans is also a producer on Marvin Jr.’s first solo album.

What is Marvin Winans Net Worth?

What happened to Michael Winans? – Church

Winans is a minister and the founder of the Marvin L. Winans Academy of Performing Arts, affectionately known as “WAPA” by staff and students. In 1989, he formed The Perfecting Church in Detroit, Michigan, and in 1992, he released Introducing Perfected Praise, an album featuring the church’s choir. Friends, a follow-up album, was released in 2001.

Alone but Not Alone, his 2007 album, earned a Grammy nomination for Best Contemporary R&B Gospel Album. Winans delivered the eulogy at Whitney Houston’s funeral at New Hope Baptist Church in Newark, New Jersey, on February 18, 2012, at noon (EST). Marvin L. Winans presents The Praise + Worship Experience, his fourth album, which was released in 2012 by MLW Productions and was filmed at his church, Perfecting Church.

In the 1970s, Winans founded The Testimonial Singers with his brothers Ronald, Carvin, his twin, and Michael with others. Their first appearance was at a talent show for high school students. The name of the band was changed to The Winans in 1975. Their careers in music spanned the 1980s and 1990s. The Winans, who was discovered by Andrae Crouch, released their first album as The Winans in 1981, titled Introducing The Winans. Albertina Walker and her Caravans, the Queen of Gospel, had a major impact on the Winans.

Marvin was an organist and pianist who also composed and recorded songs for The Winans, family members’ solo ventures, and other gospel releases. Winans won a Grammy for Best Male Soul Gospel Performance in 1985 for his vocals on the song “Bring Back the Days of Yea and Nay.” At Whitney Houston’s funeral, he and some of his siblings and family members performed a rendition of The Winans’ hit “Tomorrow.”