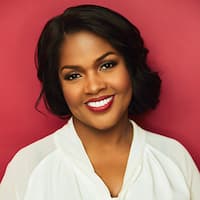 CeCe Winans is an American gospel singer,  songwriter, actress, talk show host, speaker, and author who has received several awards, including 12 Grammy Awards and 23 GMA Dove Awards. She has a star on the Hollywood Walk of Fame and 3.5 million RIAA-certified record sales, with a total projected sales of 5 million. Billboard magazine lists eight of her solo albums, as well as six albums with her older brother, BeBe Winans, as top Christian music sellers.

How old is CeCe Winans? – Age

Delores Ransom and David Glenn Winans Sr., who reported as “Mom and Pop Winans,” had CeCe as one of ten children. Her siblings are; David II, Carvin, Benjamin Winans, Daniel Winans, Michael Winans, Ronald Winans, Marvin Lawrence Winans, Deborah Winans, and Angelique Winans are all musically talented and have pursued careers in the music industry as musicians, songwriters, and producers.

Who is CeCe Winans Husband?

She is married to Alvin Love II, the couple wedded in 1984, and together lives with their two children in Brentwood, Tennessee, a suburb of Nashville. Her children appeared in the music video “If Anything Ever Happened to You” by BeBe & CeCe Winans.

What is CeCe Winans Net Worth?

CeCe has an estimated net worth of $8 Million.

CeCe Winans Lord Lift Us Up

She together with her brother BeBe released their debut album Lord Lift Us Up in 1984 for PTL Records.

Winans first came to Charlotte, North Carolina, in 1981 as a singer on Jim and Tammy Faye Bakker’s famous Christian telecast, The PTL Club. CeCe and her older brother BeBe formed a duo during their time at PTL, in response to positive responses to their version of the song “Up Where We Belong” sung as a duet, with lyrics adapted for Christian audiences, despite being originally part of the larger Winans family singing community. PTL Records released CeCe and Bebe’s first album, Lord Lift Us Up, in 1984. As BeBe & CeCe Winans, they had crossover success, ultimately releasing nine Gold and Platinum albums. Winans quit PTL just before getting married in 1984. In 1985, her brother left. BeBe & CeCe Winans, their second album, was released in 1987.

CeCe is a gospel singer who has sold millions of albums. For her solo album Alone in His Presence, she received two Dove Awards and a Grammy. Winans’ songs “Count On Me” and “Tell A Prayer” were both hits, and her duet with Whitney Houston was featured on the Waiting to Exhale soundtrack. On her seventh album, Purified, released in 2005, her son Alvin III co-wrote several tracks. She has two children and two stepdaughters, both of whom have appeared on her albums. In 2004, she was diagnosed with a severe stomach infection and had to postpone the second half of the Throne Room Tour for several months, forcing her to stop performing.

She continues to perform solo and with the group Anointed, which has had hits with songs like “Anybody Wanna Pray,” “Slippin,” and “On That Day,” which Lauryn Hill wrote. With the song “Well Alright,” which reached No. 8 on the Billboard Hot 100, she has also had a promising solo career. On April 1, 2008, Winans released her eighth album, Thy Kingdom Come, which included the single “Waging War.” Malaco Records released a BeBe & CeCe reunion album called Still on October 6, 2009. From 2012 to 2014, Winans and her brother Bebe were judges on BET’s gospel singing competition, Sunday Best.