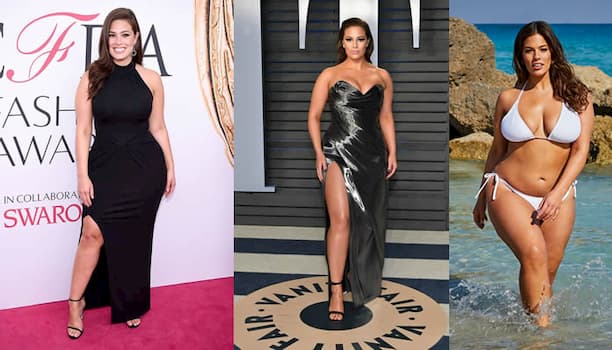 Ashley Graham is a plus size model and television presenter from the United States of America who is well known for her efforts in promoting body positivity and is a proponent of Health at Every Size movements. Her appearance on the cover of Sports Illustrated Swimsuit Issue in 2016 has been described as “bringing size acceptance into the mainstream”.

Ashley’s mother is known as Linda Graham while her father’s name is unknown. Speaking about him, Graham reveals that they do not have a cordial relationship with each other. Ashley has two younger sisters, among them: Abigail Graham Ralston.

As a champion for body positivity, Ms. Graham has spoken on her own family struggles with her family accepting her husband who is of African-American descent. At first, her elderly grandparents did not have the best reaction when she brought her husband to her home but they have since worked out the acceptance issues.

Among his directing work is several of Ashley’s fashion campaigns and as a cinematographer, he has screened his films at festivals all over the world. He studied and earned his MFA in social documentary film making from the School of Visual Arts in New York.

During Ashley and Justin’s ninth wedding anniversary, in August 2019, Ashley took to her Instagram and announced that she and Justin were expecting their first baby. On 18th January, 2020, their little boy was born. His name is Isaac.

While still in middle school in her native town of Nebraska, she was spotted by an agent of the I & I agency while she was out shopping. With this, she was signed to Wiljelmina Models in 2001 while in 2003, she joined the Ford Models. Early on in her career, she appeared in publications such as the YM magazine. Ashley was a model for Glamour’s Octor 2009 editorial issue dubbed These Bodies are Beautiful at Every Size.” She appeared alongside fellow plus-size models Lizzie Miller, Kate Dillon Levin, Crystal Renn, Amy Lemons, Anansa Sims and Jennie Runk.

Any career in the limelight is bound to be rocked by some controversy and Graham had her share of controversy in 2010 when she appeared in a TV commercial for the controversial Lane Bryant. She then appeared on The Tonight Show with Jay Leno on May 31st and addressed the controversy.

Through her years modeling, Ms. Graham has walked for the following designers: Dolce and Gabbana, H&M, Prabal Gurung, Love MagMichael Kors, Rag and Bone, Tommy Hilfiger, and Christian Siriano. She has also appeared on editorials foe such magazines as Bust magazine. She has also appeared on campaigns for plus-size women’s clothing brands by Marina Rinaldi, Bloomingdale’s Inc., Addition Elle, Simply Be, Elomi lingerie, Liz Claiborne Macy’s, Nordstrom, Evans, Hanes and Target. In 2012, she was named the Full Figured Fashion Week’s Model of the Year.

Who is the highest paid plus size model?

According to several sites, Ashley has an estimated net worth in the range of millions of U.S. dollars. In 2017, she made history in the fashion world again by making the list of the highest-paid plus-sized model after she earned $5.5m (£4.1m) that year.

♦  2017 – A New Model: What Confidence, Beauty & Power Really Look Like
Here, Ashley provides insight into her experiences as a model, her advocacy for body positivity and her views for the future in regards to the evolution of body image.