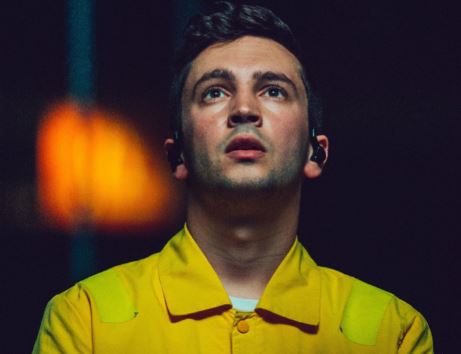 Tyler Joseph is a singer, songwriter, record producer, multi-instrumentalist, and rapper who is widely known for being the frontman the Twenty One Pilots, an American musical duo.

Aside from performing in a musical group, Tyler has had a solo career with such achievements as a solo album entitled No Phun Intended which he released in 2008. As of 2020, Tyler has received a total of six Grammy Awards nominations as a member of ‘Twenty One Pilots’, winning one of the award nominations.

How old is Tyler Joseph? – Age

Tyler is a Ohio native born to Christopher Anthony Joseph, a former Worthington Christian High School coach from 1996 to 2005 and school principal, and his wife Kelly Joseph who was math teacher and later Olentangy Orange High School’s basketball coach in 2013

With his parents’ investment in basketball as coaches, Tyler also played the sport from a very young age. He even played as a point guard for Worthington Christian.

Who is Tyler Joseph’s Wife?

Since March 28, 2015, Tyler has been married to American romantic novelist Jenna Joseph Black. Talking of how the couple met, during a Rolling Stone interview, Tyler said that it was an average scenario in that Ms. Black is a sister-in-law of a guy Tyler attended high school with, and that is how they met. After kicking off their relationship, the two got engaged on July 8, 2014.

Tyler is a father of one; a daughter by the name Rosie Robert Joseph who was born on February 9, 2020.

Tyler started his career in the entertainment industry when he began posting short comedy videos and skits on YouTube using a channel known as “slushieguys” in 2007. The channel still exists though it has not had new content uploaded since 2013.

With a history as a basketball player, Tyler was offered a university basketball for the school but he rejected the offer to pursue a life in music. He took up an old keyboard his mother had gifted him as a Christmas present and started playing music while mimicking radio melodies. From about 2007 to 2008, from his basement, Tyler worked on his first solo album titled ‘No Phun Intended’.

In 2009, Tyler formed a band known as ‘Twenty One Pilots’ alongside fellow singers Nick Thomas and Chris Salih with Tyler as the lead vocalist. The band had a fourth member, drummer Josh Dun. In 2011, both Salih and Nick left the band and the line-up has since been Tyler and Josh as a duo. Both of them are known for such singles as “Ride”, “Stressed Out”, and “Heathens” and the albums Blurryface (2015), Trench (2018), Regional at Best (2011) and “Twenty One Pilots” (2009).

During his first performances with Twenty One Pilots, Tyler’s mom would often be spotted giving away tickets outside Ohio State University to the band’s shows and say “Come see my son play music”.

Joseph has a three-part tattoo that represents “something that saved his life” Although it is believed that it deals with his Christian faith, Joseph has been specific about the fact that he does not want the meaning of his tattoos spread over the internet. However, he has stated a few times that if they decide to ask him personally, he is willing to tell people one-on-one.

Joseph and the Twenty One Pilot drummer Dun have an “X” tattoo on their body symbolizing their dedication in Columbus, Ohio to their hometown fans. On April 26, 2013, during their hometown show at the Lifestyle Communities Pavilion, they got it on stage. Joseph’s is located on his right bicep.