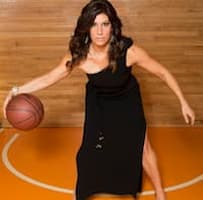 Tina Cervasio is an award-winning sportscaster from the United States. She is the lead sports anchor on Fox 5 NY WNYW’s Good Day New York and the host of Sports Extra on Sunday nights at 10:30 p.m. in New York City.

How old is Tina Cervasio? – Age

Who is Tina Cervasio’s Husband? – Family

She is married to Kevin McKearney. The couple married in 2004.

How tall is Tina Cervasio?

Cervasio has an estimated net worth of $1 million.

Cervasio covers college football and basketball for CBS Sports Network as a sideline reporter. She is also the pregame and halftime host for MSG Network’s broadcasts of the New York Red Bulls. She was the first female lead host on SiriusXM NBA Radio in 2015. Cervasio has been nominated for seven Emmy Awards over her career.

Cervasio credits her lifelong passion for sportscasting to a family trip to the Rose Bowl game when she was eleven years old. She worked at the University of Maryland’s campus radio station, WMUC, and hosted a sports show on the university’s television channel, Terrapin Time Out.

Her radio expertise includes updates on WFAN in New York, NFL sideline reporting on Sports USA Radio, and sports anchoring on MSNBC and WFAN’s Imus in the Morning program. She also presented the premiere red carpet screening of the film Remedy in New York City in 2004, and had a feature article about then-New Jersey Nets all-star player Jason Kidd published in the Spring 2004 edition of That’s Life magazine. In the fall of 2004, she also served as a special correspondent on the weekly sports television show North Jersey Sports Showcase.

In August 2002, she worked as a sideline reporter for the af2 Arena Cup game between the Florida Firecats and the Peoria Pirates, which was televised live on The Vision Channel, which is only available on Dish Network, and was commentated by Eli Gold and Mike Hold. She spoke with a number of major figures from the af2 and the Arena Football League. Cervasio considers her coverage of the 2004 Summer Olympics for Westwood One radio to be a career highlight. She worked for WCBS-TV as a weekend morning sports anchor before joining NESN in 2006. She has done radio voiceover work in addition to sports reporting.