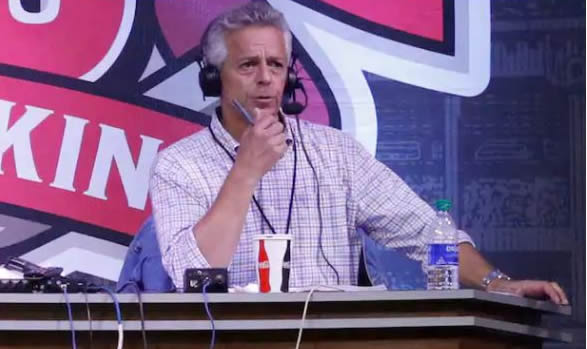 Thom Brennaman is a sportscaster from the United States of America. Thom is from the family of Marty Brennaman, a former Cincinnati Reds radio sportscaster, who is Thom’s father. In his broadcasting career, Thom has worked with the Chicago Cubs, the Reds, and Arizona Diamondbacks.

How old is Thom Brennaman? – Age

Thomas Wade Brennaman is one of the three children, and only son of former Cincinnati Reds radio sportscaster, Marty Brennaman. Thom was born to Marty and his first wife Brenda Dickey. He has two siblings, both sisters; Dawn and younger sister Ashley.

Yes, the television sportscaster is married to Polly Brennaman. The couple has two children; Luke and Ella Mae Brennaman.

Thom began broadcasting career while in college. This was at Ohio University when he joined WATH radio station and developed a love for radio. At first, he was not certain on whether to follow his dad’s footsteps but when he joined WATH, the career path was more clearer to Thom.

He graduated in 1986 and began working for WLWT-TV, an afilliate of NBC in Cincinnati, as a sports anchor/reporter. Not long after then, Thom became a play-by-play television announcer for the Cincinnati Reds alongside Johnny Bench, a Major League Baseball Hall of Famer. For WGN-TV, Brennaman broadcasted for the Chicago Cubs in the 90s.

The play-by-play Cincinnati Reds announcer has had a couple of controversies in his career. Among them has been a moment when he uttered anti-LGBTQ+ words on air on 19th August 2020 while broadcasting Cincinnati’s game against the Kansas City Royals in Kansas City, Missouri. It is reported that he was caught on a hot mic saying the words, “One of the f*g capitals of the world”. Later on, an apology statement was released by Steinlight Media on Thom’s behalf.

Brennaman was pulled off the air and suspended immediately from doing broadcasts for Reds. Brennaman also made an apology himself. The Reds again apologized to the LGBTQ+ community in Cincinnati, in the whole country and beyond. Fox Sports Ohio, also an employer of Brennaman, backed up the Reds’ decision to suspend Thom “…until further notice.”