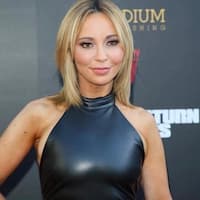 How old is Tara Strong? – Age

She is one of the daughters of Syd Charendoff and Lucy Charendoff. She was raised together with her sister Marla Charendoff in Toronto.

She is married to Craig Strong, an American former actor turned real estate agent. The couple married on May 14, 2000, after dating in 1999. They have two sons; Sammy Strong was born in February 2002, and Aden Strong was born in August 2004. VoiceStarz, an Internet-based company that teaches people how to get into the voice-over business, is run by the family in Los Angeles. She is a dual citizen of Canada and the United States.

What is Tara Strong Net Worth?

She has managed to accrued a net worth of $10 Million.

She voiced Raven, a stoic girl from the parallel world Azarath who draws upon dark energy and psionic abilities in the American animated superhero television series Teen Titans.

Raven was created by writer Marv Wolfman and artist George Pérez and first appeared in a special insert in DC Comics Presents #26. Raven is a strong empath that can feel feelings and manipulate her “soul-self,” which can battle physically and function as Raven’s eyes and ears apart from her physical body; more recently, she’s been shown to be adept with different forms of magic and sorcery.

Raven is a Cambion, the daughter of a demon father and a human mother. She is a key member of the Teen Titans superhero squad. Rachel Roth is a fictitious civilian name used by the character. Raven has starred in a number of animated television shows and films, including as one of the Teen Titans in Cartoon Network’s eponymous series, voiced by Tara Strong, and in the DC Animated Movie Universe, voiced by Taissa Farmiga, from 2014 to 2020. Teagan Croft plays Rachel Roth in the DC Universe and HBO Max series Titans, in which she makes her live adaptation debut.

She voiced Bubbles, the “softest and sweetest” of the three in the American superhero animated television series The Powerpuff Girls.

Her signature color is blue, and she wears her blonde hair in pigtails. Her personality ingredient is “sugar.” Bubbles is thought to be sweet and kind, but she is also capable of rage and can battle monsters as well as her sisters. She has a stuffed octopus doll named “Octi” as her best friend, and she adores animals. Her special abilities include producing strong sonic screams and generating a shockwave of thunder with a single clap from her hands; she also has the ability to understand several languages and interact with different animals.

She was the voice of Timmy Turner, Poof in the American animated television series The Fairly OddParents.

Timmy Turner, a grumpy 10-year-old boy, stars in the children’s show The Fairly OddParents. Vicky, Timmy’s babysitter, abuses him and his parents ignore him. One day, he is given two fairy godparents, Cosmo and Wanda, who grant him all of his wishes in order to make his life better. Many more villains were introduced as the series progressed, including Dark Laser, a spoof of Darth Vader, and The Pixies, who are said to wield as much power as fairies.