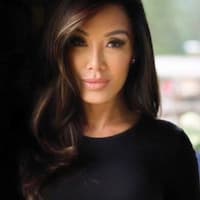 Sharon Tay is an American Emmy Award-Winning journalist and former host of two MSNBC network programs. She was previously a news reporter for KCBS-TV and KCAL-TV in Los Angeles before being laid off in 2020 after 13 years with the duopoly networks.

How old is Sharon Tay? – Age

Tay was born in Singapore and moved to the United States when he was seven years old. Her family lived in Connecticut for a number of years before moving to the Philippines.

She attended the International School Manila for her sophomore year before returning to the United States to finish her high school education at a boarding school in Massachusetts. Tay graduated from Boston University with a Bachelor of Science in Broadcast Journalism and a minor in International Relations.

How much does Sharon Tay make a year?

She earns an annual salary of $900 thousand.

She has an estimated net worth of $4.5 Million.

What happened to Sharon Tay and Jeff Michaels?

Anchors Jeff Michael, Sandra Mitchell, and Sharon Tay, as well as meteorologist Garth Kemp, were laid off from CBS TV stations in Los Angeles in May 2020 as part of a sweeping corporate layoff. KCBS, based in Studio City, laid off about a dozen journalists as part of a company-wide cost-cutting effort that comes nearly six months after Viacom and CBS merged. Last year, executives told investors that the corporate union would save $750 million.

Where is Sharon Tay now?

Sharon is a beloved veteran of the Broadcast Journalism industry who works at the Berkshire Hathaway HomeServices California Properties Beverly Hills Office. She currently resides in Los Angeles and enjoys spending her free time exercising and caring for her Labrador. She also enjoys horseback riding, hiking, skiing, and any other outdoor activity.

She began working as a general assignment reporter for CBS2 and KCAL9 in 2007. She began anchoring the weekend news on CBS2 and KCAL9 soon after. Tay was named the primary Co-Anchor for KCAL9 News on weeknights at 8 p.m. and 10 p.m. in April 2010.

Her first job was as a reporter, writer, director, and editor for Boston Cable News. Sharon went on to become the host and producer of a weekend show. She relocated to the west coast in 1993 to work as a General Assignment Reporter for a CBS affiliate in central California. Sharon received an Associated Press Award for Best Spot News Coverage of an Oil Tanker Fire while working at KMST. Sharon also founded and ran the affiliate’s consumer investigative unit, “46 On Your Side.”

A few years later, Tribune Broadcasting hired her as a General Assignment Reporter for KTLA-5 in Los Angeles. Sharon won Emmys for her coverage of the Malibu fire and the Northridge earthquake while working in the Los Angeles market. Sharon also received an Emmy for her work as a host of a business affairs show on KTLA. She later became the Weekend Anchor and, eventually, the Anchor for the early morning newscasts.

Sharon had been in that position for over seven years. Her leadership abilities led to the early morning team winning two more Emmys and two Associated Press awards for best newscast in a 30-minute format. Sharon’s charm, wit, humor, and personal style have helped her become one of Los Angeles’ most beloved news personalities.

While in Los Angeles, she was hired by the National Geographic Channel to host a science-fiction documentary series called “The Human Edge.” Sharon relocated to New York City in 2005 to assist in the launch of two entertainment shows for MSNBC. She was a producer and host of “MSNBC At The Movies” and “MSNBC Entertainment Hotlist.”