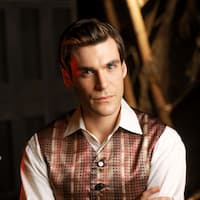 How old is Sean Maher? – Age

Maher is the son of Joseph and Margaret Maher. Maher attended New York University after graduating from Byram Hills High School, where he earned a drama degree in 1997.

Maher came out as gay publicly in 2011, using his role as a closeted gay man on The Playboy Club as a platform. He and his husband Paul have two adopted children: Sophia, a daughter, and Liam, a son. After their daughter was born in 2007, Maher took two years off from acting to be a stay-at-home dad.

He played Simon Tam, a first-rate trauma surgeon on the run after breaking his sister River out of a government research facility in the American space Western drama television series Firefly. It is revealed in the episode “Safe” that he and River had a privileged upbringing with access to the best education. Simon gave up a promising medical career to save River, despite his stern father’s strong objections. His bumbling romantic attempts with Kaylee are a recurring subplot throughout the series. He seems to unintentionally foil his attempts at romance at every turn. Caring for his sister defines his life.

He appeared as Simon Tam in the 2005 American space Western film Serenity. Humanity has colonized a new solar system in the 26th century. River Tam is conditioned to be a psychic and assassin by Alliance scientists. Her brother, Dr. Simon Tam, saves her during a bank robbery. They escape, but Simon decides to leave Serenity at the next port. Miranda is discovered to be a Reaver-infested planet.

River’s subconscious held the secret that the Alliance had created the Reavers. Mal instructs the crew to disguise Serenity as a Reaver ship so that they can travel to Miranda undetected. Knowing this, the crew incites the Reaver fleet to pursue them toward the Alliance armada. Wash crashes near the broadcast tower and is fatally impaled by a reaver spear.

He appeared as Chris McConnell in the American drama television series The Street. The show was about a small brokerage firm in New York City called Belmont Stevens and the lives of its employees.

He appeared as Adam Matthews, n aspiring writer who briefly dated Julia in the American television teen and family drama Party of Five. After their parents are killed in a car accident caused by a drunk driver, the five Salinger siblings become orphans. Salinger’s, their family’s restaurant, is taken over by the siblings. Romantic relationships became plot points as the series progressed, and new cast members joined the show. Bailey’s girlfriend Sarah was played by Jennifer Love Hewitt, and her “bad-boy” boyfriend Griffin was played by Jeremy London. Paula Devicq played Kirsten, Owen’s nanny until they married during the sixth and final season of the show.

He appeared as Brian Piccolo in Brian’s Song, the 2001 remake of the 1971 television film Brian’s Son. Brian and Gale aren’t friends at first; in fact, they’re rivals. During their first season together with the Chicago Bears, Brian is constantly outmatched by Gale, who is never in the spotlight. Brian promises to outperform Gale and take his place on the team at the end of the season. Gale is diagnosed with cancer during their second season, and Brian takes charge of his rehabilitation so that if he gives up, Brian rises to the top. Gale succumbs to the disease at the age of 26; Brian remains by his side during this time.