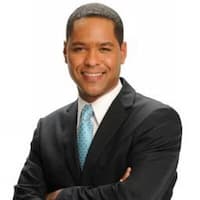 Rob Nelson is the Emmy award-winning journalist working as the Weeknight News Anchor for NewsNation’s primetime newscast NewsNation Prime. He previously worked as the weekend morning anchor and weekday reporter at WABC-TV.

How old is Rob Nelson? – Age

Who is Rob Nelson’s wife? – Marriage

Nelson is married to Jenny Hurwitz. The couple has a son named Gabe Nelson who was born around, October and November 2019.

Did Rob Nelson move to Chicago?

He announced his departure from the station on February 24, 2020, to pursue other possibilities. Nelson then moved to Chicago, where he assisted Nexstar Media Group in the creation of NewsNation for WGN America, the company’s national station.

Where is Robert Nelson now? – Career

Nelson has been a professional journalist for the past 20 years. He started his career as a reporter for The-Times Picayune, a daily newspaper in New Orleans, where he covered education, crime, politics, and, most notably, Hurricane Katrina’s aftermath.

In 2007, he made an unexpected move into television journalism, obtaining an anchor/reporter position at WWL-TV, the city’s CBS affiliate. Nelson was appointed as co-anchor of World News Now and America This Morning, the nation’s top-rated early morning national newscasts, by ABC News in New York after three years.

He covered several big breaking news items during that time, including the assassination of Osama bin Laden, the devastating earthquake and tsunami in Japan, and the 2012 movie theater tragedy in Aurora, Colorado. Nelson rose through the ranks to become a correspondent for Good Morning America, World News Tonight, and Nightline. Nelson began working as a weekend morning co-anchor and general assignment reporter for WABC-TV, the nation’s most viewed local station, in January 2014.