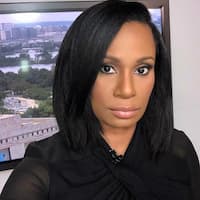 René Marsh is an Emmy nominated CNN correspondent and author working as a national correspondent for CNN, based in the network’s Washington bureau.

How old is Rene Marsh? – Age

Her parents were Jamaicans who immigrated to the United States. Scotty Marsh, his late father, left Jamaica at the age of eighteen and immigrated to the United States. Similarly, her mother, Elaine Marsh, is frequently attributed to her daughter’s success. Michelle Marsh, Marsh’s sister, is an anchor for ABC7’s 4 p.m., 6 p.m., and 11 p.m. newscasts. She is also a journalist who has won Emmy and Edward R. Murrow awards.

Kedric Payne is her husband. In 2015, the two met at a party at Washington’s Howard Theatre and began dating soon after. Rene Marsh’s then-boyfriend, Kedric Payne, eventually got down on one knee after two years. The wedding ceremony for the couple took place in November 2017 in Virginia.

In September 2018, over a year after her marriage, the CNN correspondent announced her pregnancy on Instagram. Her family was ecstatic, and Michelle Marsh, her sister, threw her a baby shower. On March 14, 2019, she finally gave birth to her baby.

Blake Vince Payne, Marsh’s son, was diagnosed with pediatric brain cancer the same year. He had to go through two rounds of chemotherapy and take five different types of chemotherapy medications. In addition, after a sudden cardiac arrest, the toddler had to be put on life support. Marsh’s cancer had finally gone into remission, according to the physicians. In November 2020, though, the condition reappeared. As a result, Blake had to again go through more chemotherapies. But, unfortunately, he couldn’t overcome cancer and passed away on April 14, 2021.

Marsh shared a touching Instagram message reflecting her time with her late kid. She also expressed her resolve to spend the rest of her life fighting pediatric cancer. As a result, the national correspondent is presently working on a #cancelchildhoodcancer petition. Everyone is welcome to join her cause and give to cancer-stricken children.

Rene Marsh is a great advocate for saving other children with cancer, despite the fact that she has lost her own son to cancer. Her tenacity and strength of character are admirable. Let’s hope the baby boy of CNN’s National Correspondent has found peace.

She is the author of the children’s book “The Miracle Workers: Boy vs. Beast.”. The book is about Blake, who is dealing with a monster of a situation that can only be solved by a miracle! Blake’s best friend Mae encourages him to seek assistance from the mythical Miracle Workers, but first, he must uncover the key that will allow him to activate their power and receive his miracle. This remarkable story demonstrates the power of hope and faith in the face of life’s most difficult challenges.

Marsh began working for CNN in 2012. She has covered a number of high-profile stories since joining CNN, including the Trump administration’s travel ban, which prevents nationals from seven Muslim-majority countries from entering the US for 90 days. Customs and Border Protection had corresponded with airlines, asking them not to accept specific passengers from certain countries, according to Marsh. Marsh was also the first to report on the enormous security infrastructure put in place to safeguard EPA Administrator Scott Pruitt, from a large number of agents on his 24-hour security detail to the agency’s biometric security technology.

Marsh broke a number of reports about the $31,000 dining set purchased by the Department of Housing and Urban Development. She’s also written reports on the state of the country’s infrastructure and sexual assault and harassment on commercial planes. Marsh was actively involved in the coverage of the missing Malaysia Airlines flight 370 and the shooting down of Malaysia Airlines Flight 17 over Ukraine. Marsh was the first to report that Dutch crash investigators had established that a Russian missile had brought down the passenger airliner, with evidence pointing to pro-Russian rebels as the perpetrators. Marsh just broke the news of a contentious proposal being considered by the Transportation Security Administration to abolish passenger screening at over 150 small and medium-sized airports across the United States. The initiative was dropped as a result of CNN’s reporting.

Marsh previously worked for WSVN in Miami, Florida, as a general assignment correspondent, covering breaking news, local politics, and education. She also worked for CBS 6 in Albany, New York, as an investigative reporter and weekend anchor. Marsh began her career at KTAL in Shreveport, Louisiana, as a reporter and anchor.