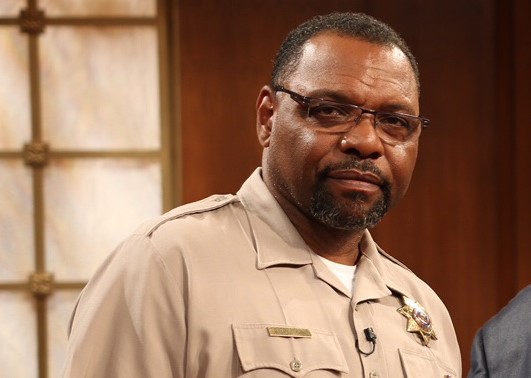 Petri Hawkins Byrd, also known as Byrd, is an American bailiff and television personality known for his role on the court program Judge Judy also as bailiff; a legal officer who is a manager or custodian with some degree of authority or jurisdiction in various offices and duties.

Byrd began work as a court officer for the Brooklyn circuit of the New York City Court System. He was moved to Manhattan’s Family Court division in 1986. It was in this role that Byrd met Judge Judy Sheindlin, who was the Supervising Family Court Judge for Manhattan. Hawkins-Byrd earned a degree in criminal justice from John Jay College in 1989. A year later, he and his family moved to the San Francisco Bay Area in California when he went to work for the United States Marshals Service.

Byrd is from a family of six siblings, with him being the lastborn. He was born in the neighborhood of Crown Heights, Brooklyn, New York.

Petri is married to a lady known as Makita Bond Byrd. The couple had their wedding on May 4, 2019, having met back in 2012. They did not kick off their love story the moment they met, it took a while. As Makita tells it, the two met on the Sunset Bronson lot in 2012 and happened to go for a comedy show together but unfortunately lost contact of each other. In 2015, Makita goes on to say that Petri texted her “Hey…,” she replied but that was the end. She then got to interview for a job on the Judge Judy show and luckily, she got accepted. As the show’s bailiff, Petri was obviously on the set and Makita thought she could surprise him on-set as she had gotten a Facebook friendship request from him.

To her surprise, he did not remember her but acted like he did during their interaction. From then they got to hung out severally and decided to date. After some years, Facebook memories reposted on Makita’a timeline a picture from their time on the Sunset Bronson. She goes on to say that were it not for the Facebook memories post, Petri would never have believed that they had met before. Since their wedding, they have been spotted together on several occasions and happy together.

Prior to marrying Makita, Petri was married to a lady by the name Felicia Hawkins who is also the mother to his four children. Felicia and Petri got married in 1980 but later on got separated and Felicia moved to the West Coast with the kids. After five months of extensive therapy, Byrd and Felicia got back together but clearly, it did not last as he is now married to another lady.

Growing up in Brooklyn, Byrd attended Eastern District High School for his education. He later joined Hostos Community College in The Bronx to further his studies.

In October 24, 1993, Sheindlin gained national recognition after the program 60 Minutes aired a segment about her highlighting her prowess in being a tough family court judge. This in-turn led to an offer to her to write a book and she wrote “Don’t Pee On My Leg” and “Tell Me It’s Raining.” She was then asked how she would feel about presiding over her own courtroom series, another offer she also happily accepted.

Throughout Judge Judy Sheindlin’s Family Court System career, Mr. Byrd was her bailiff. He learnt of the new show as it was being planned and sent her a congratulatory letter in which he asked her to have him as a bailiff if she needs one. After reading his letter, Sheindlin contacted Byrd and accepted his offer as her show’s bailiff, a position he has held since Judge Judy’s debut. This has made him the longest-running bailiff in courtroom programming history. His primary role on the show is to bring lawsuits, provide materials between the judge and the litigants, expel the parties, and escort them out until the case is over.

Byrd has had to play a larger role on many occasions by managing altercations or avoiding possible altercations between the plaintiff(s) and the defendant(s). On occasions he has contacted litigants’ parole officers or performed drug tests. Despite his limited role in speaking and commenting only when addressed for the most part by Sheindlin, Byrd is also seen offering humorous nonverbal expressions or exclamations. Byrd tells Sheindlin where she is wrong and can almost always provide answers in areas that Sheindlin is unfamiliar with, such as mathematics, car prices used, latest fads, technology, computer-related subjects, and many more.

As a long-serving bailiff on Judge Judy, a show with a huge pay as it’s production costs are quite minimal, Byrd has also managed to secure himself good pay. As such, he is reportedly worth an estimated $1 million. This is mainly from his work onscreen.