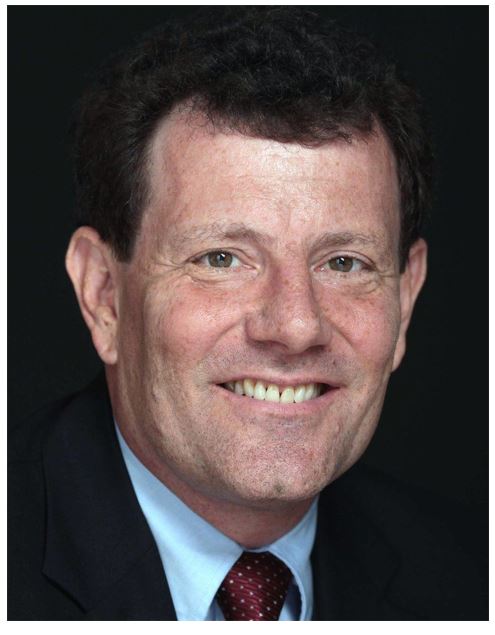 Nicholas Kristof is a journalist and political analyst from the United States. He is a frequent CNN contributor and has published an op-ed piece for The New York Times since November 2001. He is a two-time Pulitzer Prize winner.

How old is Nicholas Kristof? – Age

Where did Nicholas Kristof go to school? – Education

Kristof graduated from Yamhill Carlton High School, where he was student body president and school newspaper editor, and went on to Harvard College, where he earned a Phi Beta Kappa degree. He studied government at Harvard, interned at The Oregonian in Portland, and worked on The Harvard Crimson newspaper; “Alums recall Kristof as one of the smartest freshmen on campus,” according to a Crimson biography. As a Rhodes Scholar, he went on to study law at Magdalen College, Oxford, after graduating from Harvard. He received first-class honors and an academic medal for his law degree. Following that, he spent the 1983–84 academic year in Egypt studying Arabic at The American University in Cairo. He holds many honorary degrees.

Kristof was born in Chicago, Illinois, and grew up in Yamhill, Oregon, on a sheep and cherry farm. He is the son of long-time Portland State University professors Jane Kristof and Ladis “Kris” Kristof. His father was born in Romania to parents of Polish and Armenian ancestry, in the old Austria-Hungary, and emigrated to the United States following World War II.

In 1988, Kristof married Sheryl WuDunn, a third-generation Chinese American. Gregory, Geoffrey, and Caroline are the couple’s three adult children. Kristof and his wife started converting their family’s cherry orchard in Yamhill, Oregon, to a cider apple orchard and vineyard in 2018.

What is Kristof’s Salary?

He has an estimated net worth of $1.62 million.

In 1984, he joined The New York Times. At first, Nicholas covered economics; he also served as a Times correspondent in Los Angeles, Beijing, Hong Kong, and Tokyo. He later rose to the position of associate managing editor at The New York Times. Nicholas was held responsible for Sunday editions. His columns always focus on global health, gender issues in the developing world, as well as poverty. He has written many columns about Darfur since 2004, in particular. He has even visited the area 11 times.

His books are all co-authored with his wife, Sheryl WuDunn, and they are all best-sellers. Those books include:

-China Wakes: The Struggle for the Soul of a Rising Power, the book was published in 1994.

-Thunder from the East: Portrait of a Rising Asia, the book was published in 1999.

-Half the Sky: Turning Oppression into Opportunity for Women Worldwide, the book was published in September 2009.

-A Path Appears: Transforming Lives, Creating Opportunity, the book was published in 2014.

-Tightrope: Americans Reaching for Hope, the book was published in January 2020.

A feature documentary for Tightrope is his latest book. The book was co-authored by Nicholas and his wife, Sheryl WuDunn. The book was published in 2019.

Kristof, Half The Sky

Half the Sky: Turning Oppression into Opportunity for Women Worldwide. A book co-authored by Nicholas and his wife, Sheryl WuDunn, is out. The book was published in September 2009.

Some of Nicholas’s quotes are; The Golden Temple, Sikhism’s holiest shrine, is in northwestern India near the Pakistani border, and it is a delightful place to contemplate the draw of faith. You will be judged in years to come by how you responded to genocide on your watch. Every year, 3.1 million Indian children die before the age of 5, mostly from diseases of poverty like diarrhea.

He is an opinion columnist from Portland. He has written an op-ed column for The New York Times. Nicholas puts more emphasis on human rights abuses as well as social injustices, including human trafficking and also the Darfur conflict.  “Honorary African” by Archbishop Desmond Tutu of South Africa for shining a spotlight on neglected conflicts.

In 1990, Kristof and his wife, Sheryl WuDunn, won a Pulitzer Prize for International Reporting for their reporting on the pro-democracy student movement and the related Tiananmen Square protests of 1989. They were the first married couple to win a Pulitzer for journalism.
Kristof has also received the George Polk Award and an award from the Overseas Press Club for his reporting which focuses on human rights and environmental issues.
Kristof was a finalist for the Pulitzer Prize for Commentary in 2004 and again in 2005 “for his powerful columns that portrayed suffering among the developing world’s often forgotten people and stirred action.”
In 2006 Kristof won his second Pulitzer, the Pulitzer Prize for Commentary “for his graphic, deeply reported columns that, at personal risk, focused attention on genocide in Darfur and that gave voice to the voiceless in other parts of the world.”
Kristof was a finalist for a Pulitzer Prize again in 2012 and 2016; altogether, he has been a Pulitzer finalist seven times.
In 2008, Kristof received the Golden Plate Award of the American Academy of Achievement.
In 2009, Kristof and WuDunn received the Dayton Literary Peace Prize’s 2009 Lifetime Achievement Award. Together, they also received the 2009 World of Children Lifetime Achievement Award.
He has also won the 2008 Anne Frank Award, the 2007 Fred Cuny Award for Prevention of Deadly Conflict, and the 2013 Advancing Global Health Award (from Seattle Biomed).
Commentators have occasionally suggested Kristof for the Nobel Peace Prize, but when Media Web named Kristof its “print journalist of the year” in 2006 and asked him about that, it quoted him as saying: “I can’t imagine it going to a scribbler like me.
That’s a total flight of fancy.”
In 2011, Kristof was named one of seven “Top American Leaders” by the Harvard Kennedy School and The Washington Post.
“His writing has reshaped the field of opinion journalism,” The Washington Post explained in granting the award. That same year, he was elected to the American Philosophical Society. Earlier, in 2007, U.S. News & World Report named Kristof one of “America’s Best Leaders.”
In 2013, Kristof was awarded the Goldsmith Award for Career Excellence in Journalism by Harvard University.
Alex Jones, the Pulitzer Prize-winning director of Harvard Kennedy School of Government’s Shorenstein Center, declared in presenting the award that “the reporter who’s done more than any other to change the world is Nick Kristof.” In the same year, Kristof was named an International Freedom Conductor by the National Underground Railroad Freedom Center, largely for his work exposing human trafficking and linking it to modern slavery.
The last person named to receive the title, two years earlier, was the Dalai Lama.