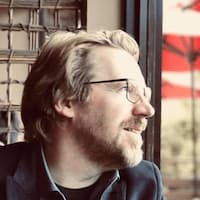 Cameron Sinclair is a designer, author, and pioneer in socially responsive architecture. He is the CEO of the Worldchanging Institute and the pro bono executive director of Armory of Harmony, a non-profit organization based in the United States that repurposes decommissioned weapons into musical instruments.

How old is Cameron Sinclair? – Age

He has not revealed his dating status. It is therefore not known whether he is married, dating, single or engaged.

Sinclair attended Kingswood School in Bath. He studied architecture at the University of Westminster and The Bartlett School of Architecture at University College London in the mid-1990s. His postgraduate thesis, inspired by his interest in social, cultural, and humanitarian design, focused on providing shelter to New York’s homeless through sustainable, transitional housing. This thesis served as the foundation for the creation of Architecture for Humanity.

Sinclair co-founded Architecture for Humanity in 1999, and it has since grown to include 90,000 design professionals, 5 regional offices around the world, and 70 independent city-based chapters. Over 2.8 million people have now lived, worked, learned, gathered, and healed in spaces built by the organization during its tenure. Sinclair received an honorary doctorate from the University of Westminster in 2008 for his contributions to the profession.

He has an estimatednet worth of  $5 Million.

Cameron was named one of the Aspen Seven, seven people changing the world for the better, by Fortune Magazine in 2004. He received the TED Prize in 2006 and the RISD Emerging Designer of the Year award in 2005. Wired Magazine’s 2006 Rave Award for Architecture was given to him and co-founder Kate Stohr for their work in responding to housing needs following Hurricane Katrina.

Following the TED Prize, he and Stohr established the Open Architecture Network, the world’s first open source community dedicated to improving living conditions through innovative and sustainable design. Architecture for Humanity and its co-founders Sinclair and Stohr were named Design Patron Award recipients for the 2008 National Design Awards in August 2008. In 2008, he was one of CNN’s Principal Voices, and he co-starred in the Sundance Channel’s Iconoclasts with Cameron Diaz.

Sinclair and Stohr were jointly awarded the Royal Society of Arts’ Bicentenary Medal in 2009 for their contributions to increasing people’s resourcefulness. Sinclair was a finalist for the World Design Impact Prize in 2016 and received the Pilosio Building Peace award in 2013. Sinclair was named a World Economic Forum Young Global Leader and a Senior Fellow of the Design Futures Council. The Open Architecture Network merged with Worldchanging in 2012 to broaden its work to include both the built and natural environments.

Sinclair moved to New York City after graduating from university in 1997, where he worked as a designer for Steve Blatz Architects, Christidis Lauster Radu Architects, and Gensler. He co-founded Architecture for Humanity with Kate Stohr on April 6, 1999, a charitable organization that develops architecture and design solutions to humanitarian crises and provides pro bono design and construction services to communities in need. The organization worked on projects ranging from schools to health clinics to affordable housing and long-term sustainable reconstruction in forty-eight countries.

Work has also included reconstruction following the 2011 tsunami in Japan, earthquakes in Haiti in 2010, Hurricane Katrina, and the 2004 South Asia tsunami. Sinclair and Stohr published a book on socially conscious design, Design Like You Give A Damn: Architectural Responses to Humanitarian Crises, in 2006. The follow-up, Design Like You Give A Damn: Building Change From The Ground Up, was released in 2012. Sinclair is a frequent lecturer and visiting professor who has spoken at a number of international conferences on sustainable development and disaster recovery. He has taught in New Zealand, Spain, Japan, and the United States in recent years.

He currently works as an adjunct professor at The New School in New York. Sinclair stepped down from the Board of Directors in May 2013 and resigned from the organization in October 2013. The organization ceased operations in mid-2015 before relaunching as the Open Architecture Collaborative. He worked for a private family foundation on health, education, and conservation projects in Cambodia, Ethiopia, and Namibia from November 2013 to December 2015. He began working with Airbnb on rural revitalization and community driven development in Yoshino, Japan, in the fall of 2015. During this period, Sinclair co-created and co-designed Re:build, the world’s first re-deployable building system.

Syrian refugees have currently built 48 classrooms in Jordan, providing education to over 5000 children. Sinclair joined Airbnb in 2016 to lead social innovation and support the company’s humanitarian efforts, with a goal of creating temporary housing for 100,000 people over the next five years.