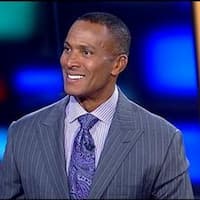 Mike Woods is an American certified meteorologist working as the morning meteorologist for “Good Day” in October 2003. He joined FOX 5 NY in June 2001.

How old is Mike Woods? – Age

He is 53 years old as of 28 January. He was born in 1968 in Sacramento, California, in the United States of America.

Woods was born to Ed Woods while his mother is Mysterious. His father is of African-American descent. His siblings are not known.

He is not married but is dating Ines Rosales. Ines is also an anchor working at Fox 5 channel as the morning anchor.

What is Mike Woods Net Worth?

Mike has an estimated net worth of $2 Million.

Does Mike Woods have Cancer? –  Illness

Mike was told he had prostate cancer in May of this year. He recounted his tale and broke the news of his sickness on his social media sites. Mike explained that the sickness runs in his family and that his father and grandpa also died from it. Mike’s humanitarian activities include a cause close to his heart: cancer. He just collected over $10,000 for the Leukemia and Lymphoma Society through the Team in Training program, which prepares runners, walkers, triathletes, cyclists, and hikers for events to benefit cancer patients and their families.

Mike has covered blizzards, Nor’Easters, hurricanes, and heat waves throughout the tri-state area. He recently covered Hurricane Irene for over 72 hours on live. Mike is originally from Sacramento, California, but has resided in a number of locales across the United States since 1993.

His first employment on the air was as a morning and noon weather anchor in Eastern North Carolina from 1993 to 1996. He covered many hurricanes in North Carolina, including Bertha and Fran in 1996. Mike worked as an arid forecaster in the Phoenix deserts from 1996 to 2001 before moving to New York. Mike graduated from U.C. Davis with a bachelor’s degree in rhetoric and communications with a focus on atmospheric science. Mike is an AMS seal holder who has been nominated for an Emmy for best weather prediction by the NATAS and was awarded the Black Media Legends award by McDonald’s in 2009. Mike is also a patron of the Fox News Apprentice Initiative, which is a diversity program that helps students and young professionals who want to work in broadcasting or journalism. Mike is a supporter and active member of 100 Black Men Inc. of New York, including its Eagle Academy, Ronald McDonald House, Housing Works, AYUDA for the Arts, and Big Brothers Big Sisters.