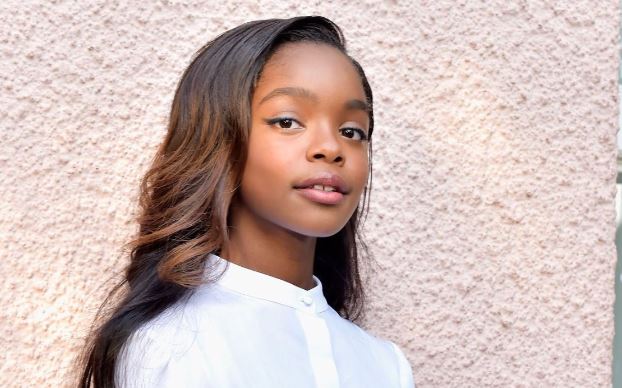 Marsai Martin is a young actress and producer from the United States of America. She is well known for her role in the sitcom Black-ish as Diane Johnson. Marsai Martin starred in the 2019 universal pictures comedy film Little for which she was also an executive producer. Martin is a nine -time NAACP Image Awards winner. She is known as Caila Marsai Martin her real name. Martin has set a record for the youngest Hollywood.

How old is Marsai Martin? – Age

Marsai martin was born on 14 August 2004 in Plano, Texas of United State of America. Martin is 16 years old as of December 2020

Marsai Martin is a daughter to carol and Joshua Martin. Marsai in 2 years old her parents noticed that she as inclined towards acting. Even though she could not speak, she would mimic characters from her favorite films and television series. Marsai’s father fully supported her daughter by contacting photographers to get her photo shoot done, when they noticed a natural talent for being in front of the camera.

Marsai Martin at the age of 5 years old she earned her first television commercial for ‘Choice Hotel’, as part of their “voice of the people” campaign. Marsai landed in Los Angeles, she landed yet another big project. Marsai was noticed in a commercial for ‘Meineke’, a popular international car care company. Marsai oozing with confidence , she auditioned for many film  and television roles. Marsai on 2014, she was offered a main role in the American sitcom ‘Black-ish’. Marsai played the role of the youngest daughter in the family, ‘Diane Johnson’ on sitcom showcased the lives of an upper-middle-class black family. Marsai with her talent and charm, she managed to become a household name in the United State of America. The series received positive reactions from people all over and ran for five seasons, covering more than 100 episodes. Currently the next season is under production, Marsai making a successful debut with a hit television series was a dream-like beginning for her acting career.

Marsai Martin is best known for appearing in the popular American comedy series ‘Black-ish’.Martin was signed at the age of 5 and one of her first commercials was for ‘Choice Hotels’. Marsai Martin moved to Los Angeles with her parents at the age of 9 years old, hoping to grab film and television roles. Later on Marsai earned the first television role of career. Marsai was cast as ‘Diane Johnson’, one of the main characters in the sitcom ‘Black-ish’. Martin appeared in all five seasons of the hit comedy series and was honored with a number of award nominations for her portrayal. she played pivotal roles in films such as ‘Nina’ and ‘Fun Mom Dinner’. Martin also worked as an executive producer and played a key role in the film ‘Little’. Marsai at the age of 13 years old she became the youngest person in Hollywood to produce a film.