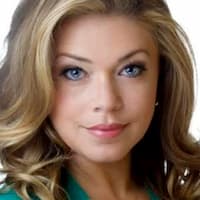 Lauren Sivan is an American journalist who works as a radio and digital presenter, covering topics such as lifestyles and life hacks, as well as presenting personal tales, lifesavers, and life-affirming knowledge. On BEONDTV, she has a new show called “Life with Lauren.”

How old is Lauren Sivan? – Age

Lauren holds a bachelor’s degree in journalism and a master’s degree in political science from George Washington University. Long Island University also awarded her an advanced certificate in Homeland Security.

She is the daughter of Jackie Sivan. Lauren is married to Rick Leventhal, who is a Fox News correspondent. The couple married in September 2005.

How tall is Lauren Sivan? – Height

Lauren began her on-air career in 2003 as a morning anchor and reporter for WETM- 18 News in Elmira, NY, and was hired as an evening anchor for News 12 Long Island two years later. Lauren reported from Jerusalem on the 2006 Israel-Lebanon conflict in addition to anchoring three newscasts per night. She also reported from Mexico on the immigration topic, winning Emmys for both.

She joined the Fox News Channel in New York City as a breaking news anchor in 2008. She also hosted The Strategy Room on Foxnews.com and reported for FNC programs such as The Fox Report with Shepard Smith. She has appeared on Fox’s late-night show Red Eye and The Greg Gutfeld Show as a regular panelist. Lauren spent ten years as an anchor and reporter for Fox11 News in Los Angeles, as well as Dr. Drew’s co-host on KABC 790 talk radio. She’s also a contributor for InvestorPlace.com, where she covers the cryptocurrency sector.

Lauren has also reported on entertainment for Extra and TV Guide Network. She hosted the Los Angeles Emmy Awards in 2016. During the 2004 Major League Lacrosse season, she even worked as a sideline reporter for ESPN. Lauren worked as a producer for Fox News Channel for six years, working on programs like Fox News Sunday and Fox & Friends.