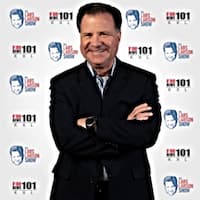 Lars Larson is an American conservative talk show host from Portland, Oregon who was involved in television and radio news from the 1970s to the 1990s and has hosted The Lars Larson Show on Portland’s flagship network KXL since 1997.

How old is Lars Larson? – Age

When his father served in the U.S. Navy and began his forestry career, the Larson family settled in Tillamook, Oregon after living in Montana, California (Happy Camp, Sam’s Bar, Doris) and Klamath Falls, Oregon. bottom. .. When Lars was a teenager. Lars has one sister, Patissildo, from Sisters, Oregon. He graduated from Tillamook High School, where he was on the speech and debate team. In the early 1990s, he married Portland radio personality Devjanes. In 1997, Larson married Tina Larson. They live in Vancouver, Washington. He has two stepchildren.

He has been married twie. The is married to Tina Larson . The couple married in 1997. He was previously married to Debb Janes from 1991 to 1995.

In December 2005, Larson explained on the air that he was protesting to rename the traditional Christmas tree at Pioneer Courthouse Square in Portland to “Holiday Tree”. This idea was rewound to the legal concerns of the main bureau. On March 18, 2008, Larson called former President Jimmy Carter an anti-Semitic at CNN’s Ludbus Tonight in connection with discussions of US policy on Jeremiah Wright, Barack Obama, and Israel.

The Lars Larson Show began airing on nine radio stations (now 22) via “The Radio Northwest Network” on January 31, 2000. Larson was initially ranked in Talkers Magazine’s Heavy Hundred (the top 4,000 radio hosts in the United States) in 2002. Larson began standing in for Talk Radio Network talk host Michael Savage in July 2003. Larson was hired by Westwood One Radio Network to anchor his own show for nationwide syndication on August 14, 2003. On September 1, 2003, The Lars Larson Show premiered on Westwood One with 105 affiliates and has since grown to 175 affiliates. The Lars Larson Show was canceled by Westwood One on March 19, 2009. On March 30, 2009, Larson’s national network show re-launched on newly founded Compass Media Networks.

Larson began his broadcasting career at the age of 16 at KTIL in Tillamook, Oregon, where he learned the ropes from Mildred Davy. Later, he worked as an announcer on KWAX in Eugene. Larson attended the University of Oregon in Eugene from 1977 to 1979, but dropped out “after only a year to work in radio and television.” Larson worked as the news director for KATR in Eugene from 1977 to 1978 and KBDF in Portland from 1978 to 1979, with internships at KEZI television and KPNW radio in between. He went on to be the news director at KZEL in Eugene before becoming a reporter at KJRB in Spokane, Washington in 1979. Larson attended Gonzaga University in Spokane while there.

Larson came to Portland, Oregon, and KXL in 1980, the first of two jobs he would hold. Larson was the morning anchor. He returned to Eugene in 1983 and worked for KVAL-TV as a reporter and later anchor. Larson returned to Portland in 1985, when he was employed as a reporter for KPTV’s The 10 O’Clock News.

He left KEX in 1988 to anchor a weekend talk program on KGW, where he remained from 1989 to 1991. In 1992, he assisted in the creation of Northwest Reports, a weekly one-hour news magazine show that debuted in September of that year on KPTV. KPTV had previously broadcast documentaries or investigative pieces under the moniker “Northwest Reports with Lars Larson” as portions inside regular newscasts or as one-time specials, but not as a regular program, since at least 1990. Larson served as executive producer and on-air anchor for the new weekly show. It was a “60 Minutes-style investigative show,” but it was centered on Portland and the Northwest. A exposé about local banks’ sloppy handling of clients’ private financial information earned the program a regional Emmy Award.

Northwest Reports had “good ratings” against “strong network competition,” according to The Oregonian, but not enough to draw significant advertising money. Larson returned to anchor responsibilities on KPTV’s 10 O’Clock News when the show was terminated in fall 1996 after a four-year run. Larson returned to KXL in 1997 to anchor The Lars Larson Show, a chat show that aired from noon to 4 p.m. Larson quit KPTV in November of that year, “after months of pressure from station management over his other career as an outspoken radio talk-show host” on KXL, after continuing to anchor the news for the station until 1998. His job as a radio talk show host was seen by KPTV management as a conflict of interest with his role as a news anchor. He went on to work for KOIN TV, where he hosted the morning show The Buzz until 2000.

Larson requested that the Oregon State Bar Association investigate if then-Governor of Oregon Ted Kulongoski lied about knowing about ex-Governor of Oregon Neil Goldschmidt’s sexual assault of a 14-year-old girl in the 1970s. A lawyer, Kulongoski, has denied knowing anything about Goldschmidt having sex with a minor. Former Goldschmidt speechwriter Fred Leonhardt informed The Oregonian in June 2004 that he alerted Kulongoski about the abuse as early as 1994, ten years before Goldschmidt openly admitted to it. Larson is requesting that the state bar investigate if Kulongoski lied about the incident and whether his bar license should be suspended or revoked.

Following an investigation, the state bar decided that both Kulongowski and Leonhardt’s recollections of the incident were “credible,” and the investigation was closed due to a lack of sufficient evidence to continue. Larson protested the verdict, claiming it was inconsistent; the result was upheld on appeal.