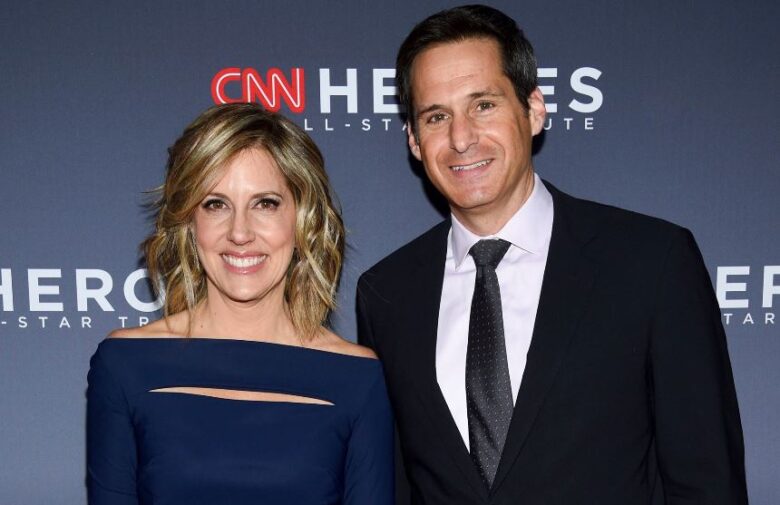 John Berman is a news broadcast anchor from the United States working for CNN. He is a co-anchor of the CNN show “New Day” alongside Alisyn Camerota and is a regular relief presenter on the “Anderson Cooper 360°” show. Prior to joining New Day, Berman was a co-anchor for the “Newsroom” show with Poppy Harlow, with Christine Romans on CNN’s “Early Start” show and co-anchored “At This Hour” with Kate Bolduan.

Berman took over from Chris Cuomo as a regular co-anchor of the New Day early morning news program, following the start of Cuomo’s then-new show “Cuomo Prime Time”. Prior to that, John had been a weekday relief co-anchor of the show.

How old is John Berman? – Age

He is one of the two children born to Jane Lewis and Gerry Berman. He has an older sister by the name Mindy Berman. Unfortunately, their parents divorced in 1978.

Yes, Berman is married to to a lady by the name, Kerry Voss. The couple tied the knot on July 20, 2001, after a long term relationship which started at Harvard University in the mid-1990s on Hasty Pudding Theatricals. The couple lives in Armonk, New York. From his marriage, Berman is a father of two boys.

Berman is a graduate of Harvard University, where he was president of Hasty Pudding Theatricals. He then began his journalism career in 1995 at ABC News as a desk assistant and began appearing on TV in 2001. He regularly contributed to ABCNews.com as well as many of the network’s broadcasts that include  “World News with Diane Sawyer,” “Good Morning America,” “Nightline,” and “20/20”.

Between 1999 and 2000, Berman covered George W. Bush’s presidential campaign as an off-air reporter for ABC News. He followed the campaign for many hours, nearly than any other reporter.

During the 2008 presidential campaign coverage, Berman reported on campaigns of Republican candidates the late Sen. John McCain, and former Massachusetts Gov. Mitt Romney in the primaries and then-Sen. Barack Obama, in the general election. Again during the 2012 coverage of the GOP primaries, Berman was a lead journalist contributor for GMA.

He worked for ABC News in 1999 and 2000 as an off-air reporter covering the presidential campaign of George W. Bush. He logged more hours than almost any other reporter with then-candidate Bush, covering Bush from his early fundraisers through his first months in the White House to 45 states.

During the invasion of Iraq, Berman covered the story as an embedded reporter and reported about the Israeli invasion of Lebanon in 2006. Other reports Berman is known for include the steroids scandal in American sports, Indian Ocean tsunami from Banda Aceh, Indonesia, the best way to catch catfish barehanded and has interviewed such people as Lionel Richie, Barack Obama, MC Hammer among other personalities.

He was the head writer for ‘World News Tonight With Peter Jennings’ from 1997 to 1999. He traveled with Jennings to the Columbine school shooting in Colorado, and to the historic visit of the pope to Cuba. He collaborated with Jennings during President Clinton’s impeachment trials, too.

He later joined CNN with his first co-anchoring job being on the show “Early Start,” alongside Christine Romans from 212 to 2017. From 2017 to 2018, he co-anchored the CNN Newsroom show with Poppy Harlow. In 2018, Berman joined Alisyn Camerota on the New Day show as a permanent co-anchor after Chris Cuomo left to present his own show.

Berman was honored with a 2004 Edward R. Murrow award for best broadcast and was awarded a James Beard Award in 2010.

What is John Berman’s salary? – Net Worth

It is estimated that Berman earns a salary of about $68,000 from his employer, CNN. With a successful and long career as a journalist, Berman is estimated to be worth about $5 million as of 2020.