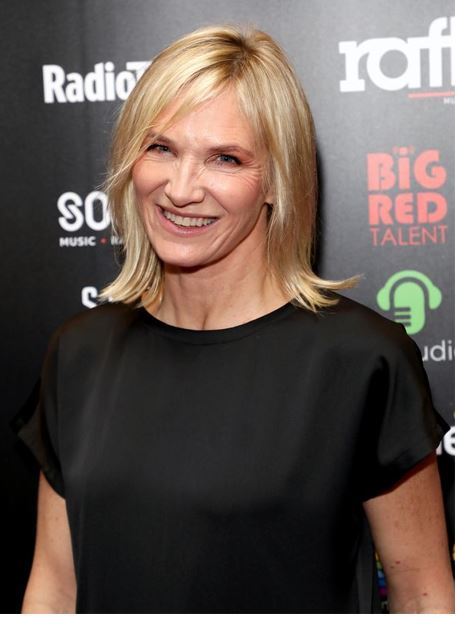 Jo Whiley was born in England as Johanne Morton Whiley a DJ and television presenter working as the presenter of her weekday evening Radio 2 show.

From 1995 to 1998, Whiley was a regular guest presenter on Top of The Pops. In 1995, she co-hosted a show on BBC Radio 1’s The Evening Session with Steve Lamacq. With her friend Zoë Ball, Whiley also presented a show on Channel 4’s The Word. In July 2009, on CD from Random House Audiobooks, Whiley wrote her autobiography, My World in Motion.

How old is Jo Whiley?-Age

The radio Dj is the daughter of electrician Martin Whiley, and Christine Whiley, who ran the post office on Althorp. Her younger sister Frances has a rare syndrome cri du chat.

Whiley is married to Steve Morton, a music executive. The couple met when Steve booked a band on to one of her shows, they married in July 1991 in Northampton. They have four children; Coco, Jude an English and film student at Brighton, Cass, an upcoming musician, and an older daughter India, born in 1992 is a food stylist. The family also has a poodle called Brodie and cats Simba and Gingin.

Whiley has been an occasional host booth for Claudia Winkleman on BBC Radio 2 since August 2009. She has co-hosted Radio 2 Live in Hyde Park since 2011. It was revealed in January 2018 that Whiley would join Simon Mayo in a drivetime show during the daytime. This is the first time in 20 years a woman has been co-presenting a daytime Radio 2 program.

In an interview with good housekeeping, she said that her favorite food that she can’t live without is Cottage cheese and pineapple. Her husband makes a joke on her by telling her that her signature dish is ‘take a pepper’, for all she does is onions, peppers, aubergines, and courgettes and turn them into a chili or lasagne.

Whiley has made a good fortune from her career as a DJ and television presenter. Her net worth is under review.