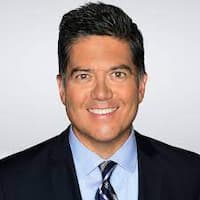 Frank Buckley is an Emmy Award-winning journalist from the United States working as an author at KTLA as an anchor for L.A.’s No.1-rated KTLA 5 Morning News.

He was born and raised in Twentynine Palms San Bernardino County, CA in the United States of America.

Buckley is married to Elena Pearce. The couple married on May 13, 1995, in a private ceremony attended by close friends and family members. The couple has two grown up children. One of his son’s name is Ben. The family lives in Los Angeles.

Where has Frank Buckley been? – Career

He’s also the host/executive producer of Frank Buckley Interviews, a weekly TV show, and podcast that airs on KTLA on weekends and is also available on YouTube and other podcast platforms. Inside California Politics, which airs on KTLA and other Nexstar TV stations on weekends, is co-hosted by Frank.

Frank came to KTLA in 2005 after working as a national correspondent for CNN. Frank has won multiple honors, including Emmys for hard news reporting, news special coverage of the Hong Kong handover, and entertainment programming programming for co-hosting KTLA’s Rose Parade pre-show.

The Los Angeles Press Club has previously honored him with prizes, including best documentary for KTLA’s “When Disaster Strikes: A Survival Guide” and best talk/public affairs for “Access L.A.” Other awards include the Associated Press Television-Radio Association’s APTRA Awards, including reporter of the year; the Radio and Television News Association’s Golden Mike Awards for writing and feature reporting; and the national Americanism in News Media Award. Frank Buckley Interviews was nominated for a National Arts & Entertainment Award by the Los Angeles Press Club in 2019. The show was nominated for an Emmy Award in 2020.

Frank’s reporting has led him to practically every town in Southern California, as well as many other parts of the country and the world. Frank traveled to Japan for KTLA in March 2011 and reported from Sendai shortly after the city was devastated by a tsunami and earthquake. Frank’s diverse responsibilities at CNN included everything from breaking news to politics to long-form enterprise reporting, as well as several CNN Presents films like “Carrier at War.” Frank served in the US Navy aboard the aircraft carrier USS Constellation in the Persian Gulf during Operation Iraqi Freedom. He reported from the Pentagon and warships in the Arabian Sea in the weeks after 9/11.

In 2004, Frank traveled with the John Kerry and John Edwards campaigns for CNN’s political coverage. He also traveled with President George W. Bush in 2003-2004, reporting frequently from the White House. Hillary Clinton’s New York Senate campaign and the 2000 presidential election and its aftermath were among her other political reporting jobs.

Hurricanes in the Caribbean and the Carolinas; the Landers and Northridge earthquakes in California, as well as the devastating earthquake in Kobe, Japan; wildfires in Southern California; the Los Angeles riots, the OJ Simpson case and trial; and the death of John F. Kennedy, Jr. off Martha’s Vineyard have all been covered by his spot news reporting for KTLA, CNN, and KCAL-TV in the 1990s.

Frank worked for KCAL-TV in Los Angeles (1992-1999), WXII-TV in Winston-Salem, N.C., and KESQ-TV in Palm Springs before joining KTLA and CNN. He’s also written for the Detroit News and the Los Angeles Times. In 1987, he earned a double major in broadcast journalism and history from USC. Frank volunteers his time to community organizations and has served on the boards of JDRF and the Asian American Journalists Association of Los Angeles. He is a member of the U.S.-Japan Council, which promotes people-to-people diplomacy, and he served on the Japanese American Leadership Delegation to Japan in 2006. Frank is also a member of the Academy of Television Arts and Sciences.