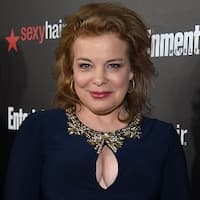 Catherine Curtin is an actress from the United States whose performance in the Netflix comedy-drama series Orange Is the New Black is what made her most famous. She also frequently appears in Homeland, Stranger Things, and Insecure.

How old is Catherine Curtin? – Age

She is married to playwright Randal Myler. The couple has a son named Dylan Myler.

She appeared as Wanda Bell, a former Corrections Officer at Litchfield Penitentiary on Orange Is the New Black. Bell is shown to be dating CO Scott O’Neill. They are first seen apart at Caputo’s band’s concert (“You Also Have a Pizza”), but they soon get back together when O’Neil shares with her how much he has learned from Sophia Burset about the female anatomy (“Comic Sans”). Bell reappears with a new position as an elementary school’s crossing patrol guard. A handful of the guards once pulled a prank on her during gun practice, tricking them into believing they had killed her, but she was still alive. O’Neill and she are currently married, and they are having a child. In order to get help coping with accidentally killing Poussey Washington, Bayley visits them.

Who is Catherine Curtin in Stranger Things?

She appeared as Claudia Henderson, the ex-wife of Mr. Henderson and the mother of Dustin Henderson in the Netflix original television series Stranger Things. Dustin’s sneaky entry, Dart, which turned out to be a baby Demogorgon, murdered and half-consumed Claudia’s cat Mews. Dustin lied to her once more, saying Mews had been seen close to Loch Nora, to keep this information from her. Mews had been replaced by a new cat that Claudia had named Tews.