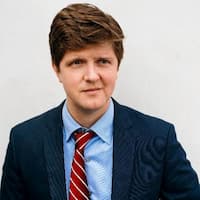 Buck Sexton is a conservative political pundit, author, and radio and television talk show host from the United States. He co-hosts The Clay Travis and Buck Sexton Show, a nationally syndicated discussion radio show, with Clay Travis, and hosts Hold the Line, a weekday program on The First TV Network.

How old is Buck Sexton? – Age

He is the son of Mason Speed Sexton and Jane Buckman Hickey. Sexton attended St. David’s School for elementary school before enrolling in Regis High School, an elite Jesuit university preparatory school. Both schools are located in New York City, and he attended Amherst College in Amherst, Massachusetts after finishing primary school. He earned a Bachelor of Arts in Political Science and graduated with honors in 2004.

He is in a relationship with Molly Sexton.

Former Fox Sports Radio personality Clay Travis and former America Now/The Buck Sexton Show presenter Buck Sexton headline The Clay Travis and Buck Sexton Show on American radio. The Rush Limbaugh Show began airing nationwide in 1988, first in syndication and then on network radio in 1997, when his syndicator was acquired by Premiere Networks. Rush Limbaugh died on February 17, 2021, after a one-year battle with lung cancer. He continued to host his show intermittently throughout his final year (the last new show with his voice was on February 2). He had three years left on a contract he had signed shortly before his diagnosis at the time of his death.

Along with Limbaugh’s long-running time slot, Sexton and Travis acquired his “EIB” (Excellence in Broadcasting) brand and “Rush 24/7” subscriber base, which was renamed as “EIB 24/7” and now includes both shows’ archives, as well as video, streamed live or archived.

Travis and Sexton describe their show as “Inspired by Rush” and use excerpts from Limbaugh (in parts branded as “Rush’s Timeless Wisdom”) to accentuate points made on the broadcast. Clay & Buck also used Rush’s opening track “My City Was Gone” by The Pretenders as the opening music. Limbaugh’s call screener and producer, James “Bo Snerdly” Golden, also makes frequent appearances.

Premiere’s parent company, iHeartMedia, owns the majority of the stations where the show airs. Travis & Sexton, on the other hand, were not generally chosen to fill Limbaugh’s place across his affiliate network. Other stations (mostly non-iHeart) switched to other shows, such as Dan Bongino of Westwood One/Cumulus Media, Dana Loesch of Radio America and Audacy, Dennis Prager or Charlie Kirk of Salem Radio Network, Markley, Van Camp, and Robbins of Compass Media Networks, and Fox News Talk’s Fox Across America. Other stations elected to reclaim full or partial management of the three hours for locally produced shows or noontime newscasts.

As of October 2021, Talkers, a trade publication that estimates talk radio audiences on a regular basis, estimated that Travis and Sexton’s show was, by a slim margin, the most-listened-to of the numerous efforts to replace Limbaugh; it estimated the show’s listenership at 9.5 million, compared to 8.5 million for Bongino and 7 million for Loesch, with the other shows showing no significant changes from before Limbaugh’s death. This figure shows a significant drop in the number of listeners from the peak of Limbaugh’s career.