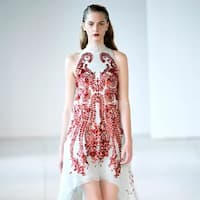 Antonio Berardi is a British fashion designer of Sicilian origin who is best known for his dresses. He currently shows his collection at London Fashion Week, but has previously shown in Milan and Paris.

How old is Antonio Berardi? – Age

His parents were Sicilians who immigrated to the United Kingdom in the 1950s. He became interested in fashion at a young age. He saved his money as a nine-year-old for Armani shirts with leather gusset shoulders. After finishing secondary school, he decided to pursue a career in design and, after attending Lincoln College of Art and Design, applied to Central Saint Martins College of Art and Design at the University of the Arts London to study fashion.

Berardi’s application was denied, and he soon began working as an assistant to John Galliano. In 1990, he applied to Central Saint Martins for the third time and was accepted into the Wendy Dagworthy-led program. Berardi is known for his “sensual, figure-hugging dresses” as well as a “striking, classical, dressed-up” style that incorporates “advanced fabrics and manufacturing techniques.” His design influences include music, independent film, post-modern art, Catholic symbolism, Italian art and culture, urban street style, lingerie, and the female form.

In 1995, he produced his first fashion week collection under his own eponymous label, with financial backing from Liberty. The show’s main model was Kylie Minogue, and accessories were designed by Manolo Blahnik and Philip Treacy.

Berardi designed for the Italian label Ruffo Research in 1998, in addition to his own label. The following year, he signed a deal with the Italian label Extè. He rose to the position of head designer for the label, and Extè also launched his own line. Berardi’s international influence grew after he moved from the London catwalks to Milan in 1999, and he was credited with reviving British fashion alongside Alexander McQueen and Hussein Chalayan. Throughout the 2000s, his unmistakable Italian influences continued to embrace a sexy female silhouette, and he admitted to loving the “curvaceous look.” Berardi left Extè in 2001, and his label has since been supported by fashion group Gibo.

In 2003, he displayed a coat illuminated with light bulbs that lit up to form a crucifix in Milan. He created the trompe-l’oeil corset black-and-white dress with lace detailing worn by Gwyneth Paltrow at the premiere of the film Two Lovers in November 2008, which Harper’s Bazaar named “Dress of the Year” for 2009.