Anne Lamott is an American novelist and non-fiction writer. She is also a progressive political activist, public speaker, and writing teacher. She is based in Marin County, California. Her nonfiction works are largely autobiographical. Marked by their self-deprecating humor and openness, Lamott’s writings cover such subjects as alcoholism, single-motherhood, depression, and Christianity.

How old is Anne Lamott? – Age

Who are Anne Lamott Parents? – Father and mother

The American novelist is the daughter of Kenneth Lamott and her lovely mother known as; Dorothy Norah Wyles Lamott. Her father, Kenneth Lamott, was also a writer. Her first published novel Hard Laughter was written for him after his diagnosis of brain cancer.

Lamott was born in San Francisco and is a graduate of Drew school. She was a student at Goucher College for two years where she wrote for the newspaper.

Is Anne Lamott in a relationship? – Spouse

Yes, the American novelist is in love. She is a married woman. On April 13, 2019, when she was 65, she wed for the first time. She married Neal Allen, 63, a former vice president for marketing at the McKesson Corporation in San Francisco. The couple had met in August 2016 through OurTime, a matchmaking site for people over 50. He was a twice-divorced father of four, who had left his job at McKesson to devote himself to writing.

The American novelist is blessed with a child. She has one son, Sam Lamott, who was born in August 1989, and a grandson, Jax, born in July 2009. 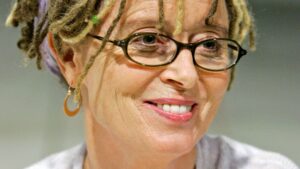 Lamott’s life was documented in Freida Lee Mock’s 1999 documentary Bird by Bird with Annie: A Film Portrait of Writer Anne Lamott. Because of the documentary and her following on Facebook and other online networks, she is often called the “People’s Author”.

The American novelist has described why she writes: I try to write the books I would love to come upon, that are honest, concerned with real lives, human hearts, spiritual transformation, families, secrets, wonder, craziness—and that can make me laugh. When I am reading a book like this, I feel rich and profoundly relieved to be in the presence of someone who will share the truth with me, and throw the lights on a little, and I try to write these kinds of books. Books, for me, are medicine.

The novelist is cited as a writer who captures well the style of narrative nonfiction called “particularism”, coined by Howard Freeman. She was awarded a Guggenheim Fellowship in 1985. She was inducted into the California Hall of Fame in 2010. She was featured on S1E2 of the show The Midnight Gospel.

The American novelist has an estimated net worth of $1 million to $5 million as of 2021.