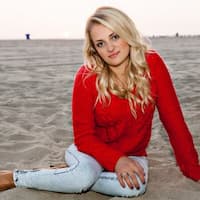 Ali Stroker is a singer, songwriter, and actress from the United States. She is the first wheelchair-bound actor to perform on Broadway, as well as the first to be nominated for and win a Tony Award. Stroker was a finalist on The Glee Project’s second season and later appeared as a guest star on Glee in 2013.

Ali grew up in New Jersey with her parents, Jody and Jim Stroker, and siblings, Jake, an older brother, and Tory, a younger sister.  She graduated from Ridgewood High School, where she served as senior class president and performed in school musicals.

Stroker is bisexual and was in a relationship with fellow The Glee Project contestant Dani Shay from 2012 to 2015. Stroker attended the 2019 Tony Awards with her then-boyfriend (now husband), David Perlow, a theater director and actor. She and Perlow reconnected in 2015 and co-founded ATTENTIONTheatre. Stroker announced that she and her husband are expecting their first child on July 17, 2022, in addition to their first anniversary.

What is Ali Stroker Disability? – Accident

Stroker and her brother were involved in a car accident when they were two years old, resulting in a spinal cord injury that left Ali paralyzed from the waist down. She uses a wheelchair because she is unable to walk.

He appeared as Charles-Ann, an old friend of Ruth’s mother in season 4 of the American crime drama television series Ozark.

In 2018, she starred as Ado Annie in the critically acclaimed revival of Oklahoma! at St. Ann’s Warehouse. In 2019, the production transferred to Broadway’s Circle in the Square Theatre, earning Stroker a Tony Award for Best Featured Actress in a Musical, making her the first person with a disability to be nominated for and to win that award.

She made history in 2015 when she became the first wheelchair-bound actor to appear on a Broadway stage. She played Anna in Deaf West Theatre’s 2015 revival of Spring Awakening.

In 2018, she starred as Ado Annie in the critically acclaimed revival of Oklahoma! at St. Ann’s Warehouse. In 2019, the production transferred to Broadway’s Circle in the Square Theatre, earning Stroker a Tony Award for Best Featured Actress in a Musical, making her the first person with a disability to be nominated for and to win that award.

Stroker has performed solo at the Kennedy Center in Washington, D.C., and Town Hall in New York, as well as concerts at Lincoln Center in New York City. Stroker appeared in The 25th Annual Putnam County Spelling Bee at the Paper Mill Playhouse. She later reprised her role in this show at the Philadelphia Theatre Company, for which she received a Barrymore Award nomination. Stroker appeared in the short film I Was a Mermaid and Now I’m a Pop Star in 2011.

She auditioned for The Glee Project in 2012 and was cast in the 12-episode series. She made it to the final episode and finished second, earning her a guest spot on Glee in Season 4, Episode 14: “I Do” as Betty Pillsbury, Ms. Pillsbury’s niece.

Cotton, also known as “Everyday Miracles,” was released in 2014. Stroker played Wendy in the MTV series Faking It for three episodes in 2014 and 2015. She appeared in Lifetime’s Christmas Ever After, which aired on December 6, 2020. She starred as Detective Allison Mulaney on the police procedural television series Blue Bloods in 2021, and as Paulette on the mystery-comedy series Only Murders in the Building.