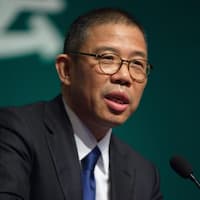 Zhong Shanshan is a rich Chinese businessman. He is the majority owner of Beijing Wantai Biological Pharmacy Enterprise and the creator and chairman of the Nongfu Spring beverage firm.

How old is Zhong Shanshan? – Age

He together with his two siblings Zhong Xiaoxiao, and Zhong Xuanxuan was born to Zhong Yangyi. During the Cultural Revolution, he dropped out of primary school and went to work in construction. He began studying Chinese in 1977 at what is now Zhejiang Radio & TV University.

He is married to Lu Xiaoping. The couple has three children together.

How did Zhong Shanshan get rich?

Zhong launched Nongfu Spring in 1996 and still maintains an 84 percent share in the company, which has more than a quarter of the bottled water market in China, according to market research firm Mintel, where many people shun tap water due to health concerns.

Zhong keeps a low public profile, and Chinese media have dubbed him a “lone wolf.” He bought an apartment in Hangzhou’s Xihu District, where he currently resides. The headquarters of Nongfu Spring is also in the Xihu district, which is recognized for its proximity to the city’s gorgeous West Lake.

Zhong worked as a journalist for the Zhejiang Daily before going into business in 1988. Zhong relocated to Hainan, a Chinese island off the coast, in 1988. During his tenure on the island, he sold mushrooms, shrimp, and turtles. He then moved on to work as a sales representative for the Wahaha beverage company, where he marketed healthcare supplements.

Zhong established a bottled water firm in Hangzhou in 1996, which became Nongfu Spring. Nongfu Spring ceased extracting natural minerals from its water in 1999. This was a smart marketing approach that helped them gain a lot of exposure with their target audience. It was popular in China at the time, where distilled water was the norm, despite concerns about its health advantages or lack thereof.

Under Zhong’s guidance, the company evolved to become China’s largest bottled water manufacturer and one of the world’s largest beverage corporations. Coca-Cola, Watsons, and Pepsi were all beaten out by the company to become the best-selling package beverage brand. Zhong used modern technologies like cloud computing and big data to obtain a competitive advantage in gaining a better understanding of Nongfu Spring’s consumer base. This enabled for unprecedented market expansion across the country, transforming this formerly small business into a national behemoth. Nongfu Springs natural water was the most popular bottled water in the country in 2012, according to Nielsen research.

His emergence coincided with a wealth wave in China when over 100 billionaires were minted in 2020, collectively adding 0.5 trillion dollars to their fortunes. However, he lost nearly $30 billion and now ranks third among Asia’s wealthiest people, after Indians Mukesh Ambani and Gautam Adani. Zhong has 75% ownership in Beijing Wantai Biological Pharmacy by September 2020. Wantai went public in April 2020, boosting Zhong’s riches and increasing his wealth. He was the chairman of Nongfu Spring and owned 84.4 percent of the company as of January 2021.

He has an estimated net worth of 67.4 billion.